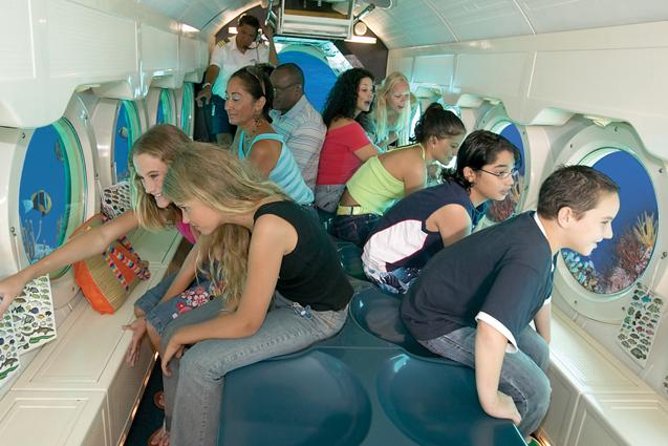 Dive to depths of 100 feet (30 meters) in a submarine, piloted by a professional and licensed crew. Discover why Cozumel is one of the top dive destinations in the world on board the Atlantis Submarine! Make an underwater journey to Chankanaab, an environmentally protected marine park, home to amazing coral formations and a variety of marine animals.

Come along and experience why Cozumel is one of the top five dive destinations in the world. Dive 100 feet (30 meters) underwater and enjoy the magic onboard a real US Coast Guard Certified submarine as you make the underwater journey to Chankanaab.

You will cruise the ocean floor alone at the island's most famous and unique attraction, Chankanaab. An environmentally protected marine park, Chankanaab is home to a huge variety of sealife until now seen only by divers. Your submarine dive adventure begins on board ferry vessel Ana that will take you on a 12 minute cruise along Cozumel's west coast.

Upon arriving at the Chankanaab dive site you are transferred to the Atlantis Submarine where you will have the opportunity to view this underwater paradise through large windows in air-conditioned comfort. Marvel at the huge variety of tropical fish including parrotfish, grunts, and groupers as your captain expertly navigates through magnificent 30 foot (9 meter) coral heads.

Throughout your voyage an informative, live narration is provided by an experienced co-pilot who will be happy to answer any questions. You will not want to forget your cameras for a once-in-a-lifetime glance into this amazing undersea world. After your 40-minute dive the submarine will resurface where the ferry vessel is waiting to return to the ticket office.

Wheelchair guests may participate if they are able to safely navigate a 7-step ladder into and out of the submarine.

Please Note: a US$2 Marine Park Entrance Fee will be charged per person, directly, on the day of the tour.

Not recommended for child age 3 and under