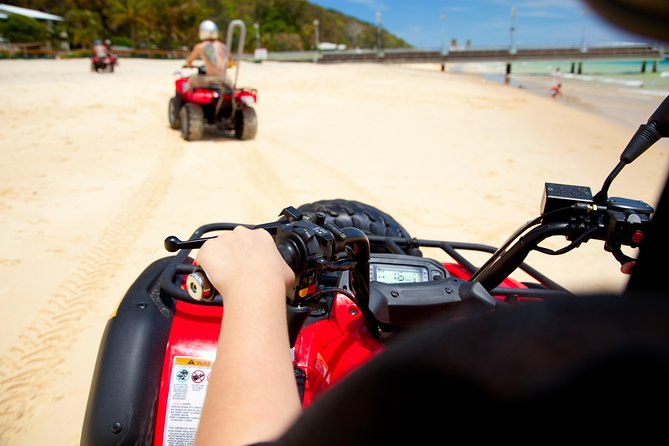 Ride out on the adventure of a life time, joining a caravan of your peers in an exciting ATV costal ride. Take in the beauties of our 37 square mile Island, as you hit the coast passing our emerald green pastures and indigenous wild life as they graze in along the hillsides. Capture and simply admire the Sea Life that inhabits our beautiful blue Caribbean Seas. Hop back on your ATV and ride over to Friars Bay, the ever so popular beach, for a welcome drink and some free beach time. Relax, swim along the beaches oasis. Ride back to the ship through the historical first neighborhood on French St Martin, French Quarters passing the first church built and French/Dutch border returning to base.
. Featuring; Private Intimate Group, Personalized experiences
Dutch/ French flags
Included: ATV, Guided, Free Drink, water,

Spend 4.5 hours exploring the island of St. Maarten on this all-terrain vehicle tour. After a hotel pickup, geta basic overview and safety training session with the tour guide before setting off on an ATV adventure.

Ride the coast of the Atlantic right to the Caribbean Ocean. Make a stop at Lame Shores for a photo opportunity. Next up, stop at the first beach on the tour, Orient Beach. A welcome drink or a bottled water awaits upon arrival. Spend some free time swimming or walking along the beach.

Thenext destination is Frais Bay at 'Kalis beach bar,' where the cove of the Caribbean waters glides in over the rugged sands and a hidden trail to a 'forgotten beach.' Rev the bikes as the journey is far from over. Head to the highlight of the venture Mullet Bay Beach riding through low lands and passing celebrityguest houses along the way.The stop at Mullet Bay is just adjacent from the airport where planes fly so close, it's easy to get a once-in-a-lifetime picture. Relax on a lounge chair or swim the day away.

On the return trip,stop at Harold Jack's lookout point for another great photo opp. The tour ends with a hotel or port drop-off.

Please note: If driving the ATV, a valid driver's license is required.

A minimum of two people per booking is required

Due to uneven surfaces, this tour is not recommended for those with walking disabilities or those using a wheelchair

Subject to favorable weather conditions. If canceled due to poor weather, an alternative date or full refund will be offered

ATV pricing is per person based, vehicle is able to seat two

Please note: a valid driver's license must be shown at the time of travel