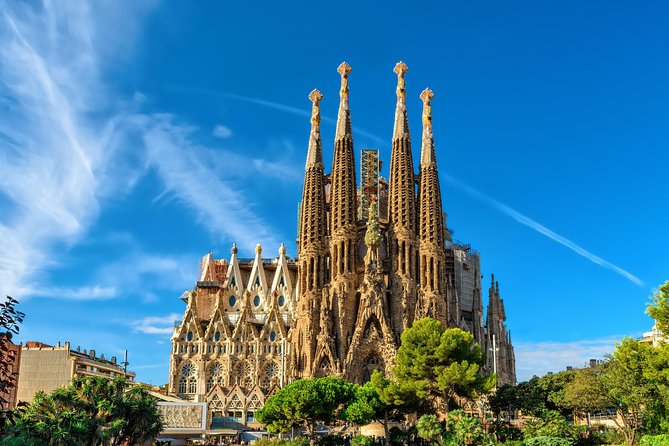 Get a taste for the top attractions in Barcelona during this 8-hour excursion covering the many highlights of the Catalan capital. Tour Passeig de Gracia, an elegant boulevard that hosts a wealth of modernist architecture like La Pedrera and Casa Batll, before discovering Antoni Gaud's Park Gell and La Sagrada Familia. Youll also explore the incredible history of Barcelonas Gothic Quarter before finishing with sublime city views from on top of Montjuc.
- Full-day highlights trip of Barcelona's top attractions
- Admire the modernist architecture like Gaud's Casa Batllo
- Enjoy the whimsical design and amazing views of Park Gell
- See the towering spires of the Antoni Gaud masterpiece, La Sagrada Familia
- Wander the ancient streets of Barcelona's Gothic Quarter
- Take the trip to 'new heights' on top of Montjuc Mountain
- Great introduction to the many attractions in Barcelona

Itinerary
This is how you can cover the most famous attractions of Barcelona in one day.

Start this tour directly from your hotel. Your guide will come to pick you up, so be sure to let us know exactly where you are staying. Enjoy an overview of Barcelona city along the route and pass by Catalunya square, the main square of the city center.

Start this tour on the Montjuic Mountain and enjoy splendid panoramic views of the city.

The Montjuic Olympic Stadium is Barcelona's main Olympic facility. It is home to concerts and major sporting events.

Continue your visit of the city heading to Barcelona's waterfront, passing by well-renowned city sights, such as the must-visit Las ramblas, probably the most famous avenue of the city, home to many bars, restaurants, and shops.

Along the way, at the lower end of La rambla, you will see the Columbus Monument, pointing to a very unusual location. Find out more information with your local expert guide.

The beach is now full of restaurants, nightclubs, and fashion shops.

Pass by the Catalonia History Museum, standing over the Barcelona waterfront.

Pass by Barcelona's Olympic Marina, one of the city's most popular leisure areas.

Have a look at the Frank Gehry's spectacular goldfish sculpture at the base of the Hotel Arts and to the nearby Gran Casino de Barcelona.

Pass by the Barceloneta, once the home of fishermen, people associated with the fishing trade and the metal industry, and nowadays one of the city's most visited and popular districts.

Located in the traditional fishing district, this is one of Barcelona's oldest and best-loved beaches.

Continue the day with a walking tour of the medieval Old Town of Barcelona. Enjoy a stroll in the Gothic quarter, where the history of Barcelona began. Learn about Catalan traditions and Barcelonas origins, while exploring enchanting corners, picturesque plazas and the narrow alleys of the Gothic quarter.

Visit the Royal Square, one of Barcelona's busiest, most vibrant spots of the Old Town. Find out why it is called the Royal Square even if the king has never lived in this square.

In the ancient Roman city of Barcelona, the Placa Sant Jaume was the site of the Forum, the meeting place and stage for political debate. It could be said that the square continues to fulfill the same role today.

The neoclassical faade conceals Gothic gems such as the historic Great Hall, or Sal de Cent, designed by Pere Llobet and built in the 14th century.

The Palau de la Generalitat in Barcelona is the seat of the Catalan government. Palau has pure Gothic, flamboyant Gothic, Renaissance and Baroque elements behind the neoclassical faade.

As you explore Barcelona's Gothic Quarter you will come across one of the city's best-kept secrets. Inside a small medieval courtyard, the four columns from the Temple of Augustus have survived despite the passing of the centuries. They are more than 2,000 years old, like Barcelona itself.

An absolute must-see visit while walking through the Old Town of the city and listening to the fascinating stories of your guide.

Pass by the Barcelona cathedral and discover its facade and the combination of Romanesque, Gothic and neo-Gothic styles due to the fact that it was built over six centuries.

The romantic, slightly faded Placa Sant Felip Neri is an unmissable corner of the Gothic Quarter.

The Greater Synagogue of Barcelona is one of the oldest in Europe and the last one to be discovered. Located in a privileged environment, the Call de Barcelona, the old Jewish quarter of the city, which still retains its medieval architecture.

Get back on the road and drive through the Eixample district, designed by Ildefons Cerda after 1895, to expand the city.

Along the way, pass through Passeig de Gracia, with its typical Catalan architecture. The avenue is home to the most remarkable facades of modernist buildings that you will get to see including Gaudi's La Pedrera, Casa batllo, and Domnechs Casa Lle - Morera or Casa ametller.

Stop At: Basilica of the Sagrada familia, Barcelona, Catalonia

The life project of a genius or a fool, with no doubts the Sagrada familia, will leave a lifelong impression.

Pass by the old Hospital de la Santa Creu I Sant pau, declared a UNESCO World Heritage for its exceptional beauty and functionality.

Finish your day tour with great views of Barcelona on one of the most privileged hills of the city: Park Gell, based above the charming, bohemian neighborhood of Gracia.

Ticket to Sagrada Familia and Park Gell (approx.36) To be paid to your guide

Children must be accompanied by an adult. Please let us know your childrens age to arrange the proper child seat.

The ''Private Tour'' Option includes the entrance tickets to La Sagrada Familia and to Park Gell.

In order to guarantee the safety of both the visitors and the team, In-Out has adapted all the hygiene and safety protocols in accordance with the requirements set by the competent and valid organizations and authorities at each stage.