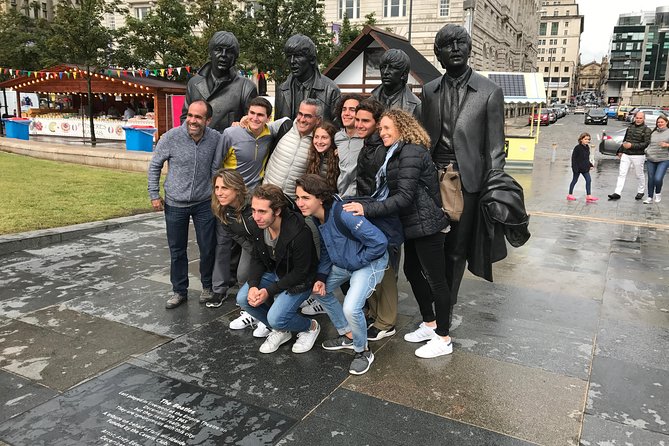 Join this superb guided walking tour with a fun Liverpool Tour Guide who is a Beatles expert & enjoy a visit to the "Double Fantasy" John Lennon & Yoko Ono Exhibition & the Cavern Club. There is much more to Liverpool than just the Beatles and you will see the waterfront, historic docks and the Town Hall and get to also understand the legacy left by 'the Fab Four' and how the city has changed since their golden years in the 60's. You will see many locations not accessible on a coach including the site of Brian Epstein's record shop called NEM's, Eleanor Rigby & the new Cilla Black statues & visit the famous Cavern club. Perfect as a Cruise Excursion as it starts literally a few minutes walk from the Cruise Terminal. Be reassured that your tour will be in small groups as we use as many extra guides as we need to make sure each tour is a personal experience.

Meet your guide here at the start of the tour, in front of the Mersey ferry and very close to the Cruise Terminal. Take selfies in front of the iconic waterfront buildings, Cunard, Liver & The Port of Liverpool.

Walk alongside the Royal Albert Docks with the Billy Fury Statue.

Walk through the World Heritage Site this is where the Beatles came out on the balcony at their homecoming after their World Tour in 1964.

See the Cavern Wall of Fame, Statues of John Lennon, outside Eric's club as well as the Arthur Dooley "Four Lads Who Shook the World" & lots of souvenirs shops and off course the Cavern

A traditional pub where The Beatles original manager Allan Williams used to pay The Beatles & other bands, photos of Shipping and sport in Liverpool & The Beatles in Hamburg.

Visit the Famous Cavern club where The Beatles played 292 times between 1961 & 1963. There is usually live music here in the afternoon and you can stay here at the end of your tour to buy a drink or souvenirs.

Guided walk showing how and why the city has changed

This tour/activity will have a maximum of 136 travelers