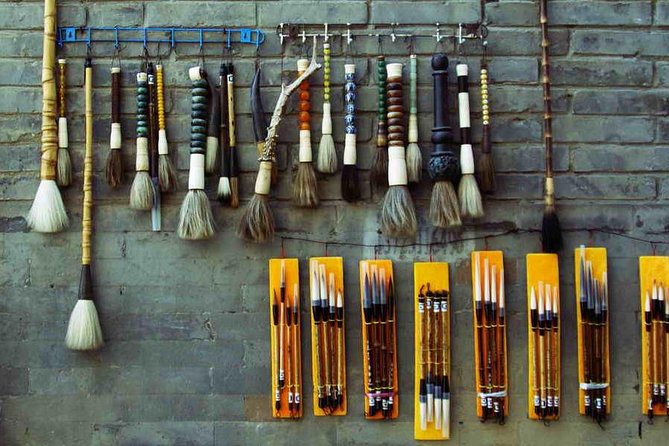 Take a deep dive into the Chinese culture in this private tour, which includes lunch/dinner at the city's oldest imperial restaurant inside Beihai Park. You will visit Temple of Heaven, Drum and Bell Tower, Jingshan Park, Liulichang Street and Yandaixiejie Street. Riding a boat across Beihai Lake, explore Hutongs by rickshaw, and learn a traditional Chinese Handicraft in a private family home.

The day begins at 8:30am when your private guide and experienced chauffeur collect you from your central Beijing hotel for the short drive to the Temple of heaven, a UNESCO World Heritage Site where the Ming and Qing emperors performed ritual ceremonies. In the grounds, watch local seniors exercizing, practicing tai chi, playing badminton, singing, dancing, and writing calligraphy on the ground.

From here, it's a few minutes drive to Liulichang Street, famous for its ancient books, calligraphy, paintings, brushes, and other traditional Chinese handicrafts. The grey stone buildings with their tiled roofs, in the style of the Qing Dynasty (1644-1911), are home to painters and calligraphers: watch them going about their art.

It's a few minutes more to Jingshan park, a manmade hill that offers spectacular views over the Forbidden city and downtown Beijing on a clear day. Here you'll learn how the last Ming emperor, Chongzhen, hung himself here in 1644 as Manchu forces approached Beijing.

From here, it's a short way to Beihai park, an imperial garden for many centuries, and the city's oldest imperial restaurant, Fangshan. Savor dishes enjoyed by the 19th-century Qing emperors and the Dowager Empress Cixi in an ornately decorated environment.

After lunch, board an imperial-style pleasure boat and cruise across Beihai lake to Houhai, one of Beijing's best-known bar streets. As you admire the traditional buildings and beautiful lake, your guide will explain the history and transformation of old Beijing. You'll learn about the hutong alleyway neighborhoods, and explore a traditional courtyard house, before you stroll along Yandai Xie Street, one of the oldest hutong in Beijing.

It's just a short stroll to the historic Drum tower, where you'll get the chance to witness the drum-beating ceremony. The drums here used to be beaten every hour so that Beijingers could tell the time.

Finally, hop aboard a rickshaw to explore the hutong and visit a local family. Here you can learn a traditional Chinese handicraft, such as making clay figurines, mask painting, paper-cutting, calligraphy, Chinese yoyo, or painting the inside of a snuff bottle: when you book your tour, please specify the craft you'd like to learn under 'special requirements'.

After an action-packed day, you'll drive back to your hotel, arriving around 4:30pm.