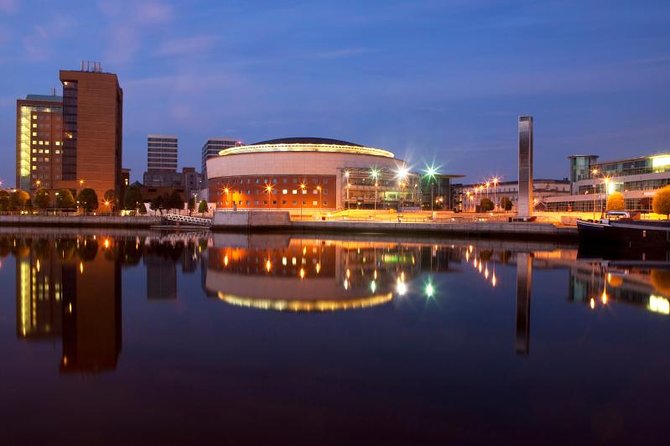 Discover Belfasts nautical heritage on this 1-hour sightseeing boat cruise! As you cruise along the River lagan, pass the banks of the Titanic Quarter and learning about its history from your guides onboard commentary. Follow the trail of the Titanic, from where she was designed at Harland and Wolffs drawing offices to the slipways where she first touched the water. Learn of the citys naval history as you pass the HMS 'Caroline Belfasts beautifully preserved battleship and then cruise back along past the cargo ships on Stormont Ships.

Hop aboard your sightseeing boat at Belfasts Donegal Quay and cruise down the River lagan, seeing city sights and learning of its rich history. A busy international port since the early 18th century, Belfast boasts a catalog of nautical sites that are crying out to be seen.

Glide past the drawing offices of Harland and Wolff, Belfast's famous shipbuilders, who designed the Titanic, and then see the ship's modern-day equivalent the impressive Titanic Visitor Experience. Pass Customs House, a magnificent building that represents the changing face of the city; once a gathering place for angst-ridden trade unionists, its now a vibrant hub and theater venue for the local community.

Proceed down the length of the Titanic slipways where the fated boat first touched water back in 1911 and pass Titanic Film Studios, where scenes from hit UK television productions like Game of Thrones have been filmed. Cruise alongside Northern Ireland Science Park, home to Titanics Dock and Pump House, and hear how the dock was the Titanic's last resting place on dry ground. From the slipways, continue to Alexandra Docks, home of Belfasts famous battleship the HMS Caroline. As the last surviving ship of the 1917 Battle of Jutland in World War I, shes a poignant reminder of Belfasts crucial navy role during the world wars.

Proceeding to The Turning Circle on the edge of Musgrave Channel, to see Northern Irelands largest seal breeding colony (summer months only), and then head down Stormont Wharf, Irelands longest deep-water quay that measures just over half a mile (1km) in length. See glossy cruise liners berthed next to old cargo ships perfectly illustrating the citys departure from its industrial roots to one of Northern Irelands most exciting destinations!

Your boat ride finishes at Donegal Quay after an hour on the water.