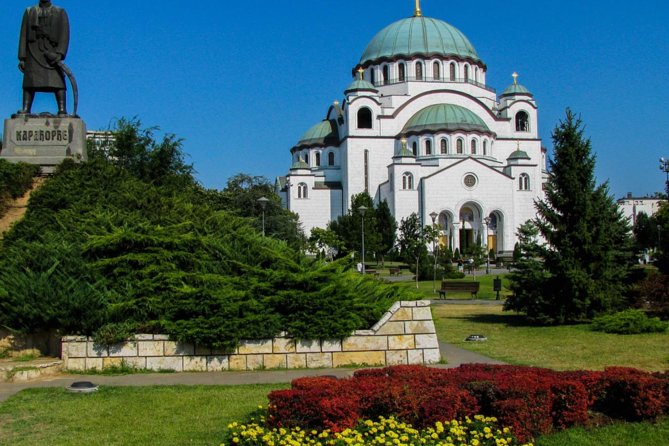 A whole day, complete Belgrade experience. Explore everything that Belgrade has to offer in both the city center and surrounding areas. Combining a walking tour and a panoramic car tour, you will get a taste of the entire city and the bigger picture of life in Belgrade.
With live, professional guiding, you will visit Zemun, Museum of Yugoslav History and House of Flowers (the resting place of Josip Broz Tito), Avala mountain and Avala tower, plus a complete sightseeing tour of the city (New Belgrade, Saint Sava Temple, Old and New Royal Palaces, Serbian Parliament, monument to Nikola Tesla, Republic square, Kalemegdan Fortress and much more...)
For sure the most comprehensive tour in Belgrade.

First stop of the tour is New Belgrade, on the other side of the Sava River with many interesting buildings. Ex-Central Committee of the Communist Party, Federal Executive Council, also known as Palace of Federation, Genex Tower or Western Gate of Belgrade, Sava Center, one of the biggest congress halls in this part of Europe, etc.
Next stop is Zemun. Here you will see: Avijatiarski Trg and the Air Force Ministry, the Post Office, Hotel Central, Towns Museum, the House with a Sundial, etc. Then start your walking tour through the heart of old Zemun: the bank of the Danube River - Zemun Promenade, the oldest Orthodox church of St. Nicholas from the 17th century, the Gardos Hill the heart of Old Zemun, Zemun citadel with Millennium Tower, the Main City Square, Bishops Office and the central city Roman Catholic Church of the Blessed Virgin, Magistarski Trg, where the city administration buildings are standing since the 19th century Magistrates Building and the Town Hall.
After Zemun, you will head for Dedinje where you can see the Museum of Yugoslav History and House of Flowers - the resting place of Josip Broz Tito, a leader of second Yugoslavia. You will visit all three venues: the May 25 museum, the House of Flowers and the Old Museum and familiarize yourself with the cultural heritage of the former country of Yugoslavia.
After that, you will leave the city, and head towards Avala with the largest monument in Serbia Monument to the Unknown Hero and famous Avala tower with a viewpoint from which you stay breathless.Here you will make a stop for a traditional Serbian lunch, in one of the oldest restaurants in the area.
Your next stop is one of Belgrades most prominent landmarks The Church of St. Sava (also known as St. sava temple, one of the largest Orthodox churches in the world. Shortstop for taking pictures.
Panoramic sightseeing: Nemanjina Street : Government Building, Ministry of Foreign Affairs, General Staff of Serbian Army, Ministry of Railways, Ministry of Finance, the State Court, etc, Kralja Milana Street: Old and New Royal Palaces, Parliament Building (photo stop),
King Aleksandar Boulevard: Main Post Office, St. Marks Church, Tamajdan Park, Metropol Palace Hotel, University Library and Technical University with monuments to Nikola Tesla and Vuk Karadzic, Terazije Square, the Moskva Hotel, Republic square with National Museum and the National Theater and Opera buildings.
Kalemegdan: Leopold's Gate, Zindan Gate, Despot's Gate, Jakia tower, Chapel of St Petka and Ruica Church (Virgin Mary Church), Mehmed-pasha Sokolovi fountain, Defterdar's gate, the Main gunpowder storage, Karl VI's gate and Nebojsha tower, The victor monument, Roman well, the King's gate and Sava promenade, the Damat Ali Pasha Tomb, Clock Gate ( Sahatkapija ) Clock Tower ( Sahatkula ), Military Museum and Istanbul's gate ( Stambol gate ), Monument of gratitude to france.

Traditional lunch (optional, 10-13 EUR, depending on the menu)