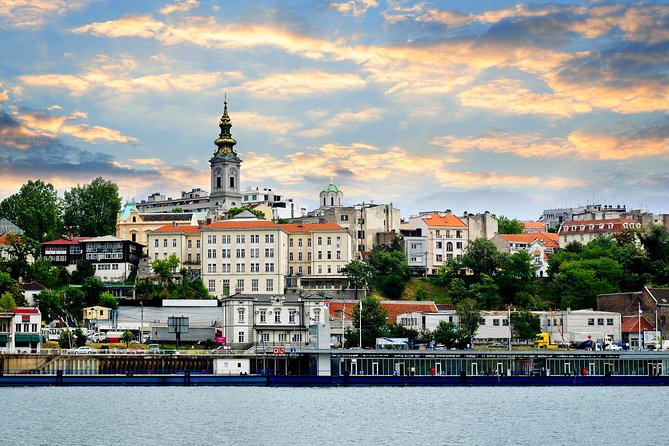 Discover all the most important sights in Belgrade with your tour guide during a 3-hour city tour. Let us show you the main attractions on both sides of Sava and Danube rivers. Walk around the Kalemegdan Fortress with your guide and enjoy the stunning scenery.

Start the tour from Studentski Trg, and head towards New Belgrade, on the other side of the Sava River.

Built as a new part of the town, after the WWII and during the socialist regime, it has many interesting buildings. Ex-Central Committee of the Communist Party, Federal Executive Council, also known as Palace of Federation, Genex Tower or Western Gate of Belgrade, Sava Center, one of the biggest congress halls in this part of Europe, etc.

Cross the Gazela Bridge and head for Dedinje Belgrades richest residential area, where you can see the Museum of History of Yugoslavia and House of Flowers the resting place of Josip Broz Tito, a leader of second Yugoslavia.

Continue to Vraar area, where you can see one of Belgrades most prominent landmarks The Church of St. Sava (also known as St. sava temple, one of the largest Orthodox churches in the world. Shortstop for taking pictures.

By passing the Slavija Square, you will enter Nemanjina Street.: Government Building, Ministry of Foreign Affairs, General Staff of Serbian Army, Ministry of Railways, Ministry of Finance, the State Court, After that, Kralja Milana Street with Old and New Royal Palaces. Stop in front of the Parliament Building where there is a short break for taking pictures and a walk between the Old and New Royal Palaces where you can hear the stories about the two dynasties that ruled Serbia in the 19th and 20th centuries.King Aleksandar Boulevard: Main Post Office, St. Marks Church, Tamajdan Park, Metropol Palace Hotel, University Library and Technical University with monuments to Nikola Tesla and Vuk Karadzic.Terazije Square with its recognizable 19-th century white stone fountain and one of the most beautiful buildings in the city the Moskva Hotel. Republic square: the National Museum and the National Theater and Opera buildings/

Walk trough Kalemegdan, the oldest and largest park in the city centre. Starting from Leopolds Gate, you will pass by the remains of the Roman castrum Singidunum and medieval walls built upon it Zindan Gate, Despots Gate, Jakia tower, Chapel of St Petka and Ruica Church (Virgin Mary Church).

Through the pedestrian street Knez Mihajlova, you will reach the Republic square once again passing by many interesting examples of civil architecture from 19th and 20th century, such as Serbian Academy of Science and Arts.

Hotel drop-off (the tour ends at Republic Square ), except for Private tour where drop-off is included also