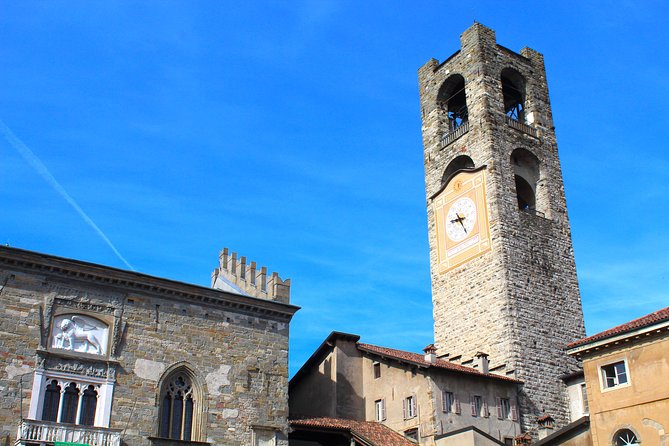 A beautiful place to visit, if you are staying in Milan, is Bergamo. It is easily reachable by a 50 minute train and can be visited in one day. When you arrive in Bergamo, you will meet your guide at the Funicolare, the cable railway station. Your tour will focus on the Upper town, which is where the medieval city centre is. Once arrived you will visit Piazza Vecchia, the main square of Bergamo, then you will go up the Campanone, the bell tower, from where you can admire Lower Bergamo. Next you will go visit the church of Santa Maria Maggiore, of Romanesque era, and decorated with the extravagance of the Baroque style. Other main attractions of your tour in Bergamo are the Antico Lavatoio and the Cittadella Viscontea. And best for last, Gelato! You will stop at the ancient Gelateria, where the favourite flavour of Italians was invented, Stracciatella, milk-based ice cream with chocolate shavings.

Itinerary
This is a typical itinerary for this product
Pass By: Funicolare S.Pellegrino - Loc.Vetta, Viale della Vittoria, 45, 24016 San Pellegrino Terme BG, Italy
The Funicolare is the means of transportation that uses a cable traction for the movement on steep slopes. It takes you from the lower part of Bergamo to the higher part and viceversa.

Pass By: Campanone o Torre Civica, Piazza Vecchia, Bergamo Italy
The Campanone is a bell tower built between the 11th and 12th century and you can access it from Piazza Vecchia. The top of the tower offers a beautiful view of Bergamo, including the lower part, with the Alps in the background.

Pass By: Piazza Vecchia, 24129 Bergamo Italy
Piazza Vecchia is the main square od Bergamo where you can find many churches and historical palaces

Pass By: Basilica di Santa Maria Maggiore, Piazza Vecchia 6, 24129 Bergamo Italy
Santa Maria Maggiore is the main church of Bergamo. Its construction started in the 8th century, but has been modified and restored in time. The outside is of Romanesque architecture and the inside of Baroque style.

Pass By: Lavatoio Medievale, Citt Alta, 24129 Bergamo, Province of Bergamo, Italy
The antique washhouse is a marble fountain built in 1891 and placed in the middle of one of Bergamos squares. Today it is not used for its main purpose, but it has become a symbol of Bergamo.

Pass By: Piazza della Cittadella, 2, 24129 Bergamo BG, Italy
The Cittadella Viscontea is a square space fortified by walls in the upper part of Bergamo. It was built for the Visconti family, an important aristocratic family, involved in political matter of Milan and Bergamo.