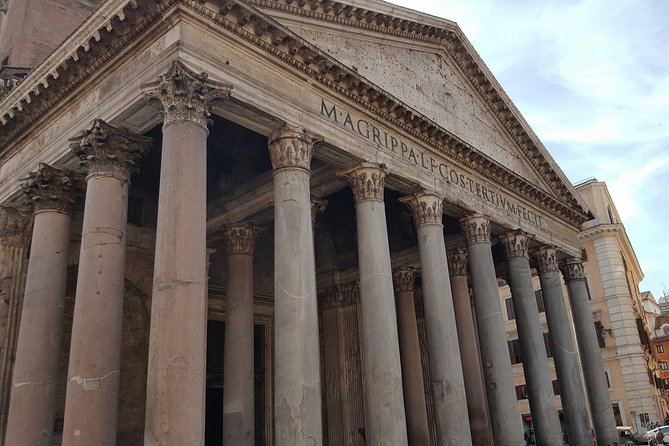 This is a Private Tour of Rome 7 hours with personal English speaking driver and personal Official Guide at the Vatican museums(Sistine Chapel & St.Peter Basilica).In the morning at 9,00 am your personal driver will be waiting for you directly to the lobby of your Hotel to take you to the smallest state in the world, the Vatican (except on Wednesday the Vatican tour will be moved to 12.30 to have the chance to enter inside the basilica).After the Vatican tour your day will continue with your personal driver who comfortably will drive you to Navona Square,Pantheon,Trevi fountain,Spanish steps Colosseum and Circus Maximum,
Normally we suggest a quick lunch to see as much as possible but definitely you can ask suggestion to the driver for a local restaurant.
Your private driver will give you any historical information about all the sites you will be visited but inside the car since italian law does NOT allow him to explain off the vehicle.

The Vatican Museums (Italian: Musei Vaticani; Latin: Musea Vaticana) are Christian and art museums located within the city boundaries of The vatican city. They display works from the immense collection amassed by popes throughout the centuries including several of the most renowned Roman sculptures and most important masterpieces of Renaissance art in the world. The museums contain roughly 70,000 works, of which 20,000 are on display,[3] and currently employ 640 people who work in 40 different administrative, scholarly, and restoration departments

Piazza navona (pronounced [pjattsa navona]) is a square in Rome, Italy. It is built on the site of the Stadium of Domitian, built in the 1st century AD, and follows the form of the open space of the stadium.[1] The ancient Romans went there to watch the agones ("games"), and hence it was known as "Circus Agonalis" ("competition arena"). It is believed that over time the name changed to in avone to navone and eventually to navona.

The Pantheon (UK: /pnin/, US: /-n/;[1] Latin: Pantheum,[nb 1] from Greek Pantheion, "[temple] of all the gods") is a former Roman temple, now a church, in Rome, Italy, on the site of an earlier temple commissioned by Marcus Agrippa during the reign of Augustus (27 BC 14 AD). It was completed by the emperor Hadrian and probably dedicated about 126 AD. Its date of construction is uncertain, because Hadrian chose not to inscribe the new temple but rather to retain the inscription of Agrippa's older temple, which had burned down.

Trevi fountain (Italian: Fontana di trevi) is a fountain in the Trevi district in Rome, Italy, designed by Italian architect Nicola Salvi and completed by Giuseppe Pannini and several others. Standing 26.3 metres (86 ft) high and 49.15 metres (161.3 ft) wide,[1] it is the largest Baroque fountain in the city and one of the most famous fountains in the world. The fountain has appeared in several notable films, including Roman Holiday, Federico Fellini's La dolce vita, the eponymous Three Coins in the Fountain, The Lizzie McGuire Movie, and Sabrina Goes to Rome

The Colosseum or Coliseum (/klsim/ kol--SEE-m), also known as the Flavian Amphitheatre (Latin: Amphitheatrum Flavium; Italian: Anfiteatro Flavio [afiteatro flavjo] or Colosseo [kolosso]), is an oval amphitheatre in the centre of the city of Rome, Italy. Built of travertine, tuff, and brick-faced concrete,[1] it is the largest amphitheatre ever built. The Colosseum is situated just east of the Roman forum. Construction began under the emperor Vespasian in AD 72,[2] and was completed in AD 80 under his successor and heir Titus.[3] Further modifications were made during the reign of Domitian (8196).[4] These three emperors are known as the Flavian dynasty, and the amphitheatre was named in Latin for its association with their family name (Flavius).

The Circus maximus (Latin for greatest or largest circus; Italian: Circo Massimo) is an ancient Roman chariot-racing stadium and mass entertainment venue located in Rome, Italy. Situated in the valley between the Aventine and Palatine Hills, it was the first and largest stadium in ancient Rome and its later Empire. It measured 621 m (2,037 ft) in length and 118 m (387 ft) in width and could accommodate over 150,000 spectators. In its fully developed form, it became the model for circuses throughout the Roman Empire. The site is now a public park.

The Vittorio emanuele II Monument (Italian: "Monumento Nazionale a Vittorio emanuele II"), also known as the (Mole del) Vittoriano, Il Vittoriano, or Altare della patria (English: "Altar of the Fatherland"), is a monument built in honor of Victor Emmanuel II, the first king of a unified Italy, located in Rome, Italy.[1] It occupies a site between the Piazza venezia and the Capitoline hill. It's currently managed by the Polo Museale del Lazio, the Italian Ministry of Defense and the Museo Centrale del Risorgimento Italiano (Museo centrale del Risorgimento al Vittoriano).

The Via dei Fori imperiali (formerly Via dei Monti, then Via dell'Impero)[1] is a road in the centre of the city of Rome, Italy, that runs in a straight line from the Piazza venezia to the Colosseum. Its course takes it over parts of the Forum of Trajan, Forum of augustus and Forum of Nerva, parts of which can be seen on both sides of the road. Since the 1990s, there has been a great deal of archeological excavation on both sides of the road, as significant Imperial Roman relics remain to be found underneath it.

The Roman forum, also known by its Latin name Forum Romanum (Italian: Foro Romano), is a rectangular forum (plaza) surrounded by the ruins of several important ancient government buildings at the center of the city of Rome. Citizens of the ancient city referred to this space, originally a marketplace, as the Forum Magnum, or simply the Forum.

Car at Disposal in Rome 7 hours

Gratuities at you leisure if enjoyed the service

During the Pope Wednesday General Audience the entrance in the Basilica is not allowed;

Pick up time 9 am-CHANGES NOT ALLOWED

Your driver is not a licensed tour guide. Due to strict Italian laws and regulations in place to protect officially licensed guides, drivers can comment and explain attractions only from inside the vehicle. Drivers cannot elaborate on the attractions when they are outside of the vehicle.