Bethlehem Half Day Private Tour From Jerusalem - With Reviews & Ratings 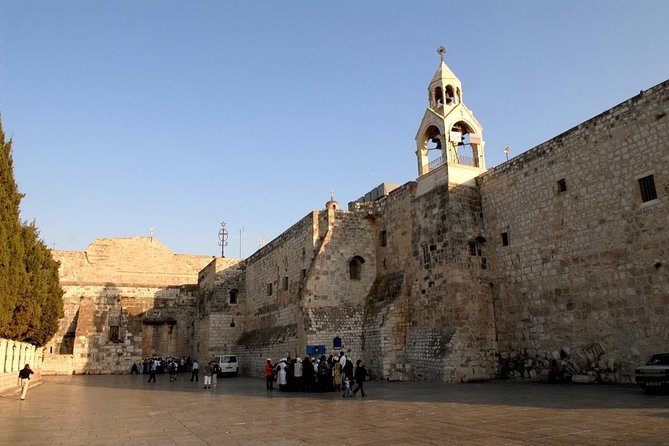 Visit the city where Jesus was born, Bethlehem. Enter one of the oldest churches in the world, the Church of nativity. Discover the Milk Grotto and learn of it's history and origins. Stroll through the Shepherd's fields and see the Manger square.

This is a special way to experience the city of the birth of Jesus, as you venture into the West Bank. This Bethlehem tour provides a great opportunity to explore this city on a guided tour. Your first stop is one of the oldest churches in the world, where it all began; The Church of the Nativity, the birthplace of Jesus. A huge church with a long history of religious significance, you will be able to see the various chapels of the Catholic, Armenian and Greek Orthodox Christians.

Next you will visit the Franciscan Grotto of the Lady Mary and learn how the ‘Milk Grotto’ got its name. A large underground cave with a Franciscan chapel built directly on top, this is the site where it is believed that Mary and Joseph took Jesus for refuge from King Herod, before fleeing across the holy land to Egypt.

Your final visit for the day is in this ancient city, is to the Shepherd’s fields on the outskirts of the city. Believed to be the location where the Shepherds sited the Star of Nativity before venturing to visit Jesus, these fields hold a number of stunning shrines and a beautiful chapel, drawing pilgrims from around the world.

This tour will provide you with the best opportunity to spend a day focused on the sacred city of Bethlehem, with all the logistics looked after, leaving you to absorb the amazing spiritual sites, whilst hearing the historical and biblical background to each site.

08:15 - Pick-up From which Jerusalem hotels
08:30 - Pick-up at Carta Parking Lot (Near Jaffa Gate)
09:30 - Arrive Church of Nativity where Jesus was born and see the star of Bethlehem, then tour Bethlehem
10:30 - Arrive to the milk Grotto
11:15 - Arrive to the Shepherd filed
12:00 - Transfer back to Jerusalem
NB: All times are approximate