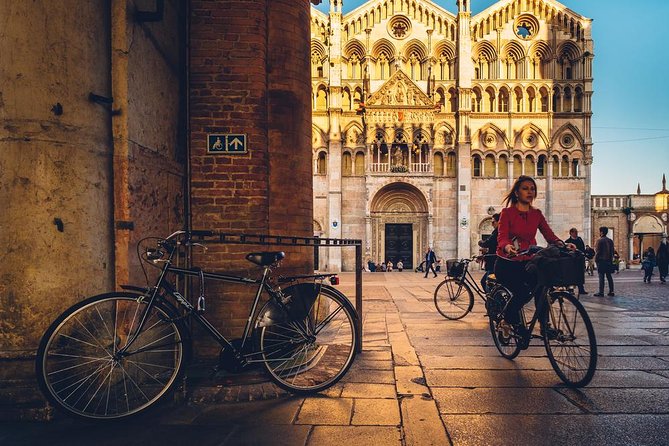 You will find Ferrara's bike-friendly streets and frozen-in-time palazzi relatively unexplored and wonderfully tranquil during this 3-hour bike tour.

A heavyweight Renaissance art city peppered with colossal palaces and still ringed by its intact medieval walls, Ferrara jumps out at you like an absconded Casanova (he once stayed here) on the route between Bologna and Venice.

Two souls vibrate in the city of Ferrara: a medieval one in the south and the a Renaissance one in the north, converging in the Castello Estense.

Start by Viale Cavour-Corso Giovecca, the road axis that represents an ideal bridge between the Middle Ages and Renaissance. We are going to reach the ancient city walls by bike, and we well find out that Ferrara is one of the few Italian cities still walled up, surrounded by as many as 9 km of defensive walls with green paths, viable on foot or by bike.

Then we will continue our guided tour beginning from the mighty Castello Estense. Thissymbol of the citys history and power dates from the time ofthe Este family, the Lords who ruled Ferrara for over 300 years, making it a capital for culture and artistic achievements. See themagnificent faade of St. George Cathedral, all decorated with stone relief likelace and full of statues, with monsters and griffins at the front door. The long side of the cathedral on Piazza Trento & Trieste (once the market square) is also beautiful.

Then we'll go on towards the famous district of 'Addizione erculea.' Commissioned by Duke Ercole I at the end of the 15th century, its the very first European example of integral development plan that earned Ferraras inclusion in the UNESCOList in1995. Here, the most famous building is Palazzo dei diamanti with 8,500 ashlar stone diamond-shaped blocks.

From Quadrivio Degli Angeli we arrive at Piazza ariostea dominated by the statue of court poet, Ludovico Ariosto. Not far away isthe Monumental Certosa of San Cristoforo, a beautiful religious complex from the 15th century, and the relaxing Ferrara walls too.

Bike rental (around 10 euro per person)