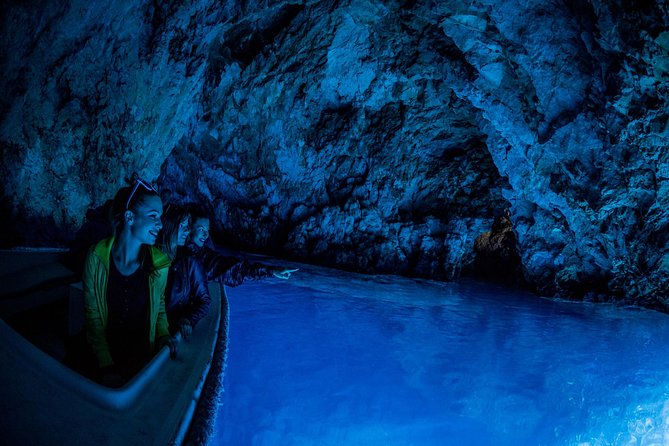 Visit Croatia's Blue Cave and five surrounding islands, including Hvar, on a small-group tour by speedboat from Split. Your day of soaking up the sun, and swim in the emerald waters of the Adriatic Sea starts at 8am. Professional skipper and sailor will lead your tour, and light refreshments of bottle of water are included. You don't have to worry about the tickets for the Blue Cave too, they are included in the price.

Croatia is best known as a dream getaway for a perfect holiday. It has everything to satisfy the fantasy of any vacationer. Most famous historical places, untouched nature, hidden beaches where the water is so clear that the boats in sea appear like they are floating in the air, not to mention the gastronomy, and this is just the beginning. As expeienced guides we would love to invite you to join us on our Blue Cave and six island tour. Blue Cave is a natural phenomenom which is situated 1 hour and 30 minutes from Split's main harbor, on Bievo island.

The Monk seal Cave consists of a spacious outer part, and the inner narrow and darker part with the underwater opening to the partially shaded place where it housed a type of seals that got the name, the Mediterranean Sea Bear. The local people called him Sea Bear or Sea Cow, while his Latin name was Monachus monachus, in translation - a monk. In this 70-meter-long and 4-meter-wide cave they lived, they were born and perhaps died, also nicknamed the sirens of the Bisevo island. The last ones were seen somewhere in the 60s of last century. The cave is very mysterious and attractive, and the attractiveness increases if you are lucky maybe to see one of the sea bears.

Stiniva is one of the most famous coves on Vis island, and certainly has the most unusual form. It is located on the south side of the island, bordered by high cliffs that leave only four meters close to the entrance from the sea. After passing through the "door" , it opens a beautiful rounded bay with a pebble beach. Stiniva was declared the most beautiful beach in Europe in 2015.

Our next destination is a small paradise on earth situated between 3 islets Blue lagoon on Budikovac island. Blue lagoon is one of the prettiest locations in the middle part of the Adriatic for snorkeling and swimming. Here you can let your self be lazy and enjoy in tranquility in one of the most beautiful seas in the world. The next location that will leave you breathless is Pakleni islands or translated to english The Devil's island. Don't worry there is no burning flames but they are most beautiful island complex in Adriatic sea.
Over 20 hidden beaches and bays this place will wake explorer in you and make you wanna stay. From Pakleni islands we are heading to the most famous island in Croatia, Hvar island ( Hvar town - which is probably one of the most beautiful harbors in the world ) .

In Hvar you will have some free time to discover the Old Town, climb the Fortress or just get lost in the small narrow streets like locals do. We let you get acquainted with the town by yourselves. One of the most popular boat tours is certanly this one, it is one of those tours that make you ask for more, and it is a perfect way to discover the undiscovered.

Hotel pick up ( 3 km from the city center , Diocletian's palace

Entrance fee for the Hvar Fortress