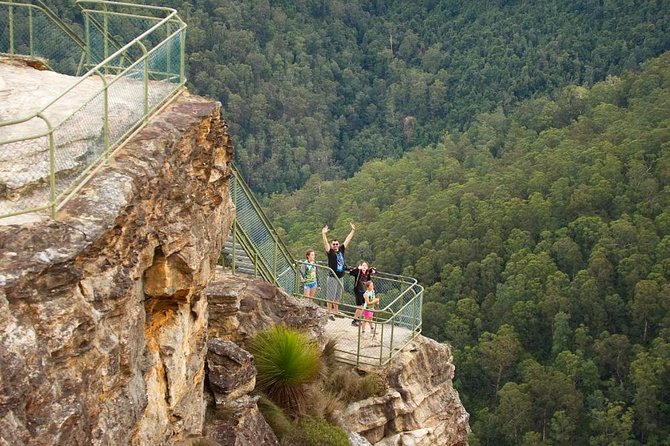 Enjoy this small group day trip from Sydney with a maximum of 10 guests as you discover magnificent valleys, rivers and gorges of the World-Heritage listed National Park, that is the Blue mountains. Experience the true beauty of the Blue mountains off the beaten track as you immerse yourself in the spectacular wilderness areas of such a unique region in an area that you can't appreciate without getting your shoes dirty (so to speak). Starting no later then 7:30 am to avoid the traffic, you'll head straight off towards Australia's own Grand Canyon for an eventful day packed with close encounters, vistas and walks.

This tour is designed to focus on those less visited spots taking more time to soak up the atmosphere in stunning rain-forest gorges, ferny grotto's, swimming holes and a series of cascades.

A trip across the iconic Sydney Harbour Bridge takes us straight on the tollways to avoid the traffic.

Visit Featherdale wildlife park. For us, they'll open 1 hour before the official opening hours, so you will get to meet the mostly nocturnal animals long before the large crowds get here!

These falls are best viewed on our circuit walk (See next).

Guided circuit walk in the spectacular Jamison Valley, including the Wentworth Falls (approximately 1-2 hours, pending on guests' agility and the weather) to discover the true beauty of the Jamison and Grose.

Picturesque mountain village - worth a photo stop when the Cherry trees are blossoming in spring!

Poster girls of the Blue Mountains. Of course we'll go visit them - but there's so much more to see.

Spectacular views over the Megalong Valley, and Narrowneck. Get your camera's ready!

One of the best and most impressive lookouts of the Blue Mountains, offering uninterrupted views over the Grose Valley AKA The Australian Grand Canyon. Only reachable via a section of unsealed road - rough enough to keep out the crowds.

Leaving Mt Tomah Botanic Garden, we return to Sydney via the scenic Bell's Line of Road, Bilpin (the fruit bowl of NSW) and the Hawkesbury River area.

This tour is designed to focus on those less visited spots taking more time to soak up the atmosphere in stunning rainforest gorges, ferny grottos, swimming holes and a series of cascades.