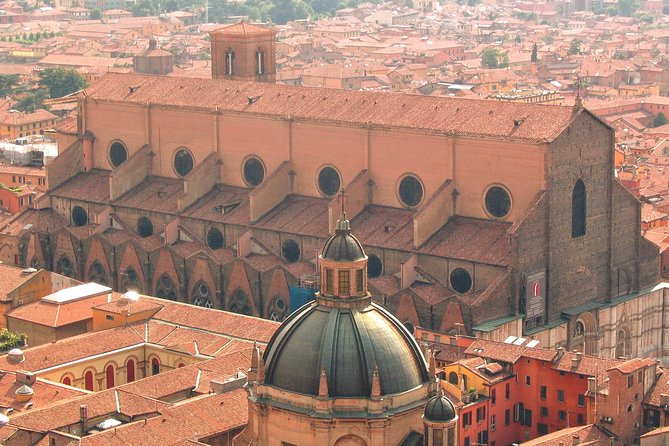 If youre fascinated by art and history youll relish the chance to visit Piazza maggiore which includes the palaces constructed for public administration (Palazzo del Podest, Palazzo di Re Enzo and Palazzo del Capitano del popolo), as well as piazza del Nettuno, the Santo Stefano complex, San Petronio, Asinelli and Galisenda towers and much more.
Our expert English-speaking guide will share interesting anecdotes and urban legends as you wander by some of the citys best known monuments, as well as explore hidden canals and porticos.
Bologna is a truly magical place and this tour is sure to be an unforgettable experience!

Itinerary
This is a typical itinerary for this product
Stop At: Fontana del Nettuno, Piazza del Nettuno, 40124 Bologna Italy
This small group tour, for a maximum of 14 people, is a great way to discover Bologna with others! It provides an insight into the history of this small and ancient city.
A local and top rated guide will meet you in the city centre, before taking you to explore this beautiful city. Theres no need to worry about the weather, no matter if its raining or sweltering, there are nearly 40 kilometres of porticos to keep you dry or shaded, and nearly every significant attraction in the city is just a few minutes' walk.
The starting point will be the graceful Neptune fountain,
Duration: 10 minutes
Stop At: Basilica di San Petronio, Piazza Maggiore, 40124 Bologna Italy
The unfinished faade of the Basilica dominates one side of the piazza Maggiore, where you will admire the elegant town hall and the Governors Palace
Duration: 20 minutes
Stop At: Piazza Maggiore, Bologna Italy
If youre fascinated by art and history youll relish the chance to visit piazza Maggiore which includes the palaces constructed for public administration (Palazzo del Podest, Palazzo di Re Enzo and Palazzo del Capitano del popolo)
Duration: 10 minutes
Stop At: Basilica - Santuario di Santo Stefano, Via Santo Stefano 24, 40125 Bologna Italy
You will also stop to admire Santo Stefano complex
Duration: 10 minutes
Stop At: Le Due Torri Torre degli Asinell, Piazza di Porta Ravegnana, 40126 Bologna Italy
Not far from the Palace are the famous towers, Asinelli and Garisenda, which were referenced by Dante in his Divine Comedy. These towers appear to lean even more dramatically than the famous leaning tower of Pisa, due to their narrow shape.
Duration: 15 minutes
Stop At: Finestrella di Via Piella, Via Piella, Bologna Italy
Youll also have chance to see one of the lost canals of Bologna. A small window on via Piella provides a rare glimpse of a canal dating back to the Middle Age, dug to bring the waters of the two rivers into the city centre
Duration: 10 minutes