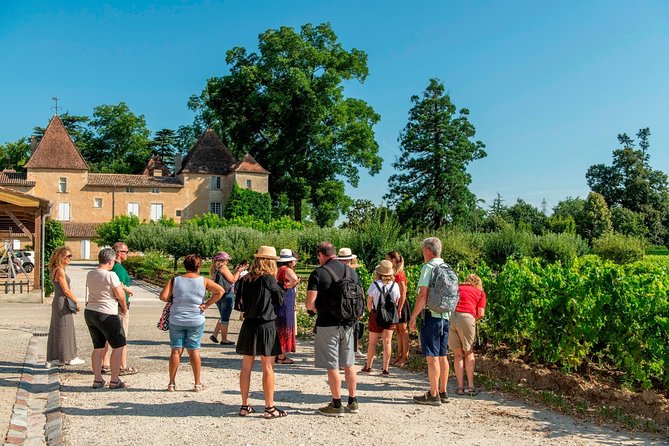 Explore the cellars and vineyards of Bordeaux's wineries on this 5-hour tour, and enjoy tastings along the way. Travel into the countryside outside Bordeaux by air-conditioned coach and hear your local guide talk of the area's winemaking history. With the precise itinerary changing daily, perhaps discover wineries in the Mdoc or Saint-Emilion territories. Tour the cellars with a guide and marvel at the row after row of vines disappearing into the distance. Enjoy two tasting sessions on your tour and gain an understanding of the delicate flavors at work.

Leave the hustle and bustle of Bordeaux behind you and travel out into the countryside to discover the vineyards and wineries for which the area is famous. From well-known estates in Saint-Emilion and Sauternes to family-run vineyards across the region, Bordeaux has a fascinating winemaking heritage and a strong reputation for quality. This half-day tour is ideally suited to those keen to discover the Bordeaux wine country but with limited time to spare.

As the views from your coach change from urban city to the rural countryside, listen as your guide goes into detail about the areas winemaking history and traditions. Wine is believed to have been produced in the region from as far back as the 8th century and its an industry of which many of the locals are very proud.

The tour visits two different wineries and vineyards every day (except in Saint-Emilion where only one is visited) and each one has something different to offer. Perhaps head to the beautiful Mdoc territories to explore the cellars and discover the delicious wines produced there. Meet the winery owner or manager and enjoy a guided tour of the estate.

Stroll the rolling hills along row after row of grape-laden vines, and admire the beautiful scenery this part of France has to offer. Enjoy two tastings along the way and gain an appreciation of the delicate fruitiness of the wines produced.

After five hours exploring the Bordeaux wine country and enjoying tastings, your tour will come to an end.

This tour is open to adults over 18 only