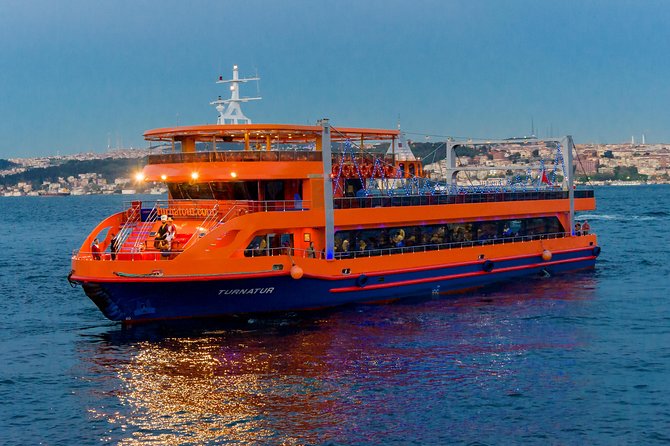 Experience a relaxing evening on board this Dinner cruise along the Bosphorus. Take in the beautiful and magical sights while tucking in to a delicious meal and enjoying the evening entertainment.

After pick up our guest from hotels head straight to Kabata port (Near the Dolmabahce palace) where our boat is docked. Set sail at 8.30pm and begin by sailing up to the Black sea from Europen Side.

Help yourself to a welcome drink from the on board bar and then sit back and enjoy the enchanting scenery. As the sun sets on the Bosphorus, admire Istanbul's famous relics from the comfort of your window side seat, see the highlights like Dolmabahce palace, Blue mosque and The Maiden tower. Watch out for Faith Sultan Mehmet Bridge and the Rumeli fortress and gaze in wonder at the iconic structure that connects Asia to Europe.

Whilst sailing enjoy the traditional entertainment, including Katibim show, belly dancing and Turkish folk dancing.
Return back to Kabata port at 23:45-24:00 pm. The tour finishes with a drop off at your hotel.

Return to hotel at approximately 11.45pm