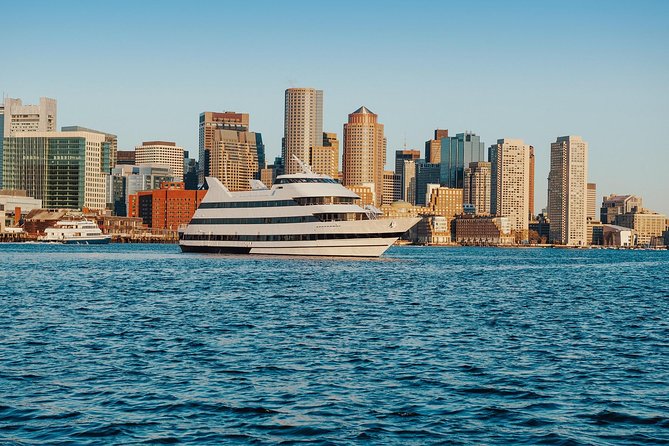 See Bostons waterfront sights from the deck of a luxury sunset dinner cruise. Enjoy a fabulous fine-dining buffet with a carving station and hit the dance floor while one of Bostons top DJs spins your favorite songs. Join the sunset party on the ships exterior deck the biggest patio party in Boston!

This two-hour Boston sunset dinner cruise is a fun and unique way to see some of Bostons famous attractions, as you start a night out on the town. Purchase a cocktail on board and watch as the sun sinks below the horizon. Youll see breathtaking nighttime views of Boston sights like the Bunker hill monument, USS Constitution (known as "Old Ironsides") and the site of the Boston Tea Party.

Get in line for a decadent all-you-can-eat buffet, complete with a carving station. While enjoying your dinner in the elegant setting of the ships dining room, youll be entertained by the colorful characters of the ships cabaret. After dinner, the DJ turns up the heat with the sounds of your favorite songs. Show your moves off on the dance floor, or take a romantic stroll with that special someone around the ships decks.

The dance party continues all the way across the harbor, as you take in the sparkling views of the Boston skyline.

Please note: guaranteed seating costs an additional fee which may be made payable on day of travel to the local tour operator

Cruise duration is approximately 2 to 3 hours