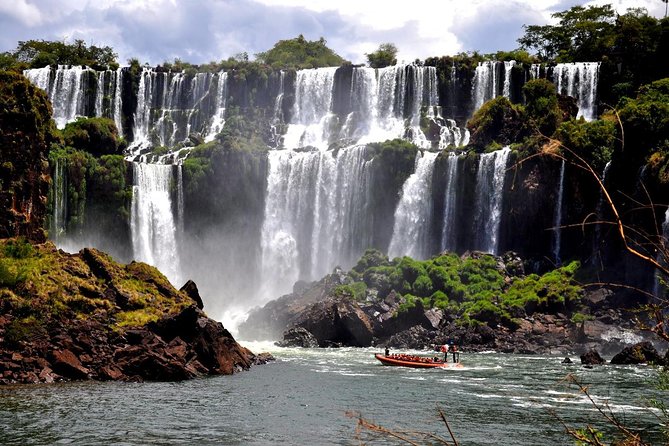 Even if you're staying in Puerto Iguaz, you can still visit the Brazilian side of Iguassu Falls! Journey deep into Iguacu National Park, get an up-close view of two of its largest waterfalls and be prepared for unparalleled panoramic views.

Iguassu Falls was created as the result of a volcanic eruption that left a large crack in the earth. Taller than Niagara Falls (and twice as wide), Iguassu consists of 275 cascading falls spread out over nearly 2 miles (3.2 km) in a horseshoe shape. During the rainy season, between November and March, the rate of water that flows over the falls can reach more than 450,000 cubic feet (12,750 cubic m) per second. In short, its a phenomenal natural wonder that youll want to see from as many angles as possible.

Leaving Puerto Iguaz behind, you'll cross the border into Brazil and visit Devils Throat, the largest waterfall in the region and one best seen from the Brazilian side of Iguassu Falls. Here, you'll watch as 14 falls drop 350 feet (107 meters) with such force that a 100-foot (30-meter) tall cloud of mist stays permanently suspended overhead. This area famous is famous for its rainbow, and great photo opportunities abound!

For a close-up of the falls, walk through the subtropical forest of Iguacu National Park to the base of Salto Floriano. Then take the elevator to the top of the falls, or walk out over the falls at Salto Union.

Guided sightseeing tour of the Brazilian side of Iguassu Falls