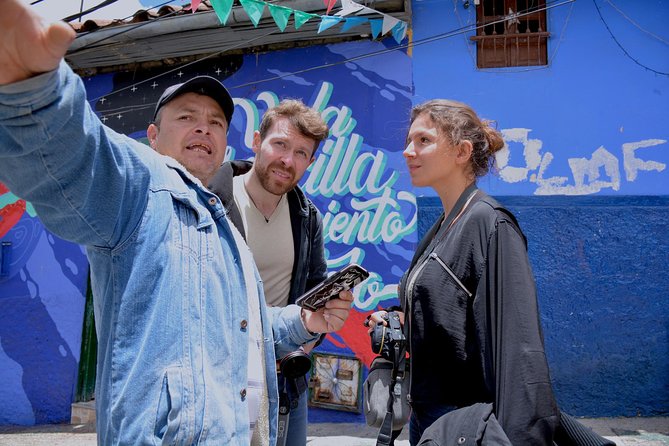 Some authors define resilience as the ability to develop skills and positive attitudes in an unpleasant scenery and under negative circumstances. In this tour, you will witness the resilience of a group of young people from Egipto neighborhood in Bogot. You will hear about their fascinating life stories, especially about their radical transformation from being gang members to become tour guides. They are eager to show you how their personal development influenced their social environment in a very positive way. This tour is a great way to have an approach to the reality of many Colombian underprivileged neighborhoods.

Breaking Borders is an initiative proposed by former heads of a gang who decided to leave behind their criminal life and more than 27 years of violent conflicts between rival gangs of the vulnerable neighborhoods of Bogotá. They have found in tourism a real alternative for their personal and professional development. Now, they offer a guided tour around important areas of "The Guardian of History", how Egipto is called, since it is the second neighborhood of Bogotá and it has undergone several transformations from the colonial period to the present.

The tour begins when our driver picks you up at your place of stay and bring you to El Chorro de Quevedo, the place where the foundation of Bogotá took place. There you will meet our English speaking guide who will serve as a translator and also tell you about their process, and one of the leaders of the project who will be your local guide.

Then, we will pass through the cobbled-stoned streets of La candelaria neighborhood which is full of vibrant colors. There you will reach the place where the first aqueduct of Bogotá was located. From there, you will go upstairs until Nuestra Señora de Egipto, which was once a hermitage, later became a temple and nowadays is a church. From there we will go deeper into the neighbourhood through Calle 10, a so-called Royal Street where you will also find cobble-stoned streets and colorful houses with balconies. In the past, it was the only street that Egipto inhabitants could use to go to the city center.

Next, you will reach El Cuadrado, which once was a strategic point for the gangs for having control of the territory. Here, your tour guide will talk about the reasons that gave birth to the division of the community into 2 enemy gangs and why this violent conflict didnt seem to have an exit. They will also explain how their life as criminals and gang members was and the inspiring process they have been though in order to break with almost 3 decades of conflict. In this point we will have the chance to try a home-brewed chicha and a local snack.

After that, you will pass through a slum where you will see the characteristics of an underdeveloped community. The community still struggles with access to basic utilities and most of the people dont have a comfortable lifestyle. However, they are full of life thanks to their warmth, and the smiles and desire of their children to fight for their dreams.

The final stop of the tour will be a proof of the transformation that this neighborhood has had. At the highest part of Egipto, there is a communal futbol field. There you will have the chance to interact with the kids and play with them some futbol. Here you will hear why this field is so important for the reconciliation and the construction of a sustainable peace.

Private transportation from and to your hotel

The tour is private and personalized