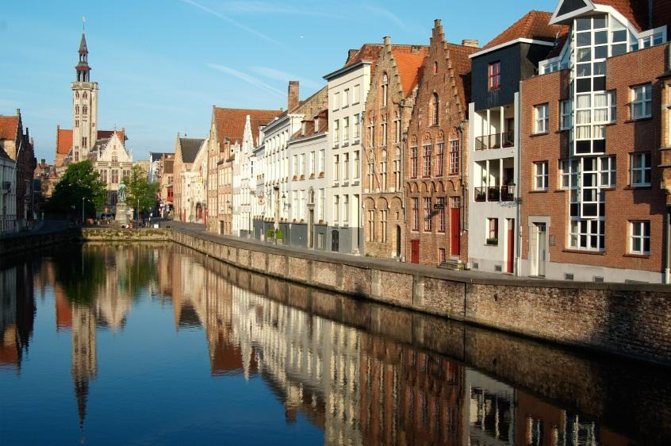 This Brussels Super Saver combines three popular tours at one discounted price for you to enjoy over two full days! Spend the first day on a half-day city sightseeing tour of Brussels and a half-day trip to Antwerp. Then spend another day on a full-day trip to Ghent and Bruges. Its the perfect way to see the best of Belgium, from the capitals top attractions to Europes largest harbor to important churches and historical sites! During each tour, you will travel in a comfortable coach with a professional guide.

Brussels Half-Day City Tour (morning) With your guide, see the Grand place, Market Square, St Michaels Cathedral, the Atomium, the Chinese Pavilion, the Japanese Tower, the Royal Residence of Laeken, St Marys Church, the Sablon district, the Court of Justice, the Royal palace, Jubilee Park, the Triumphal Arch, Royal Park and the Belgian Parliament.
Antwerp Half-Day Trip (afternoon)In Belgiums second-largest city, see with your guide the top sights, including Market Square and the Cathedral of Our Lady (which houses four Rubens masterpieces). After some time at leisure in the city center, you'll enjoy panoramic harbor views from the 9th floor of the MAS Museum (closed on Mondays) and see diamonds sparkle at the Diamond pavilion of the MAS.

Ghent and Bruges Day Trip (full day)The next day, enjoy a fully guided tour to Ghent and Bruges. In Ghent, see attractions like St Bavo Cathedral, St Nicolas Church and the Castle of the Counts of Flanders. In Bruges, see Our Lady Church, Market Square, the Chapel of the Holy Blood and more. If you wish, take an optional boat cruise through Bruges famous canals.
Please see the Itinerary section below for more details of each tour.

Day 1: Brussels Half-Day City Tour (morning) Walk with your guide to Brussels’ beautiful Grand Place, where you’ll see Market Square. Then board a luxury coach and drive past the magnificent St Michael’s Cathedral, built in 1047, and continue to the National Basilica of Koekelberg, inspired by Paris’ Sacred-Heart Basilica.
Next, see the world-famous Atomium, the Chinese Pavilion and the Japanese Tower, famous for their 17th- and 18th-century collections of ceramics. Pass the Royal Residence of Laeken and St Mary’s Church before exploring the Sablon district with its countless antique shops. See the impressive Court of Justice and the Royal Palace, and then visit Jubilee Park, home to the Triumphal Arch and some excellent examples of Art Nouveau homes. Pass the Royal Park and the Belgian Parliament on your way back to the city center where your tour ends.
Antwerp Half-Day Trip (afternoon)After a 1-hour break to have lunch (own expense), journey to Belgium’s second-largest city, Antwerp, with your guide. Home to Europe’s second-largest harbor, Antwerp is often called the City of Rubens after the 17th-century painter who used to live here. Enjoy the city’s well-preserved historical character as you see its top sights. At the city’s ancient fortress, start your walking tour to Market Square and visit the Cathedral of Our Lady, home to four Rubens masterpieces, including The Raising of the Cross.
After some time at leisure in the city center, you'll board the coach and take a drive to Antwerp's famous harbor, the largest in Europe! Enjoy the breathtaking panoramic views from the 9th floor of the MAS Museum (closed on Mondays) and see diamonds sparkle at the Diamond pavilion of the MAS. Learn why Antwerp is called the world center for diamonds, before returning to Brussels.
Day 2: Ghent and Bruges Day Trip (full day)Leaving Brussels behind you, spend a fully guided day in two of Flanders’ wonderful towns – Ghent and Bruges. After a one-hour drive through the scenic Belgium countryside, arrive in Ghent, where you will visit St Bavo Cathedral, home of the world-famous painting, Adoration of the Mystic Lamb (optional; closed on Sundays). Then take a walking tour to see some of Ghent’s important medieval buildings, such as the Belfry, St Nicolas Church and the Castle of the Counts of Flanders.
Then depart Ghent and enjoy the drive through the Flemish countryside toward Bruges. During the drive you will listen to an audio history of Bruges and the Flanders region on headphones. Upon arrival in Bruges, visit the Lake of Love (Minnewater) and the Beguinage (a convent), and then enjoy free time to have lunch (not included) before you begin a walking tour. During the walking tour, see Our Lady Church with a statue by Michelangelo; Market Square with the Belfry; and Town Hall Square (Burg) with the Chapel of the Holy Blood. You also have the option to take a boat cruise through Bruges’ famous canals before returning to Brussels.