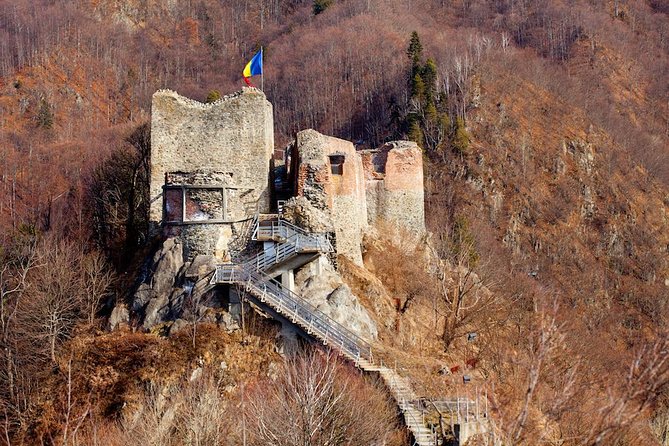 Enjoy a full-day tour passing through different stages of Vlad the Impaler's life (also known as Dracula). Start early in the morning departing Bucharest. Reach Targoviste, where Vlad the Impaler Dracula had his princely court. From here you will go to the gateway of the Carpathians and walk up 1480 steps in order to reach the ruins of the Poienari Fortress, the real Dracula's castle from 1453, located high up on a cliff. Next, you will drive over the mountains to reach Bran Castle, the famous 14th century stronghold made famous by Bram Stoker in the novel Dracula. On the way back to Bucharest stop at the famous Snagov Monastery where Dracula is believed to be buried. Enjoy an exclusive lecture on Dracula & Vlad the Impaler, and learn facts and fiction about this iconic legend.

You will spend the whole day searching for clues about Dracula's life (in the 15th century he was known as Vlad the Impaler). He was the ruler of the Wallachia region. His seat of power was in Targoviste. This is the first stop of the day where you will visit the ruins of his court and the tower of Dracula. Afterwards, you will head to Curtea de Arges and visit one of the most beautiful churches in Romania. It is here where the first two royal couples of Romania are buried.
From here you will journey to the gateway of the Carpathians, to the ruins of Poienari Castle and learn more about the myth of Dracula. You will drive through the mountains to reach Dracula's Castle in Bran, the notorious dark and mysterious place. The last stop of the day will be at the Snagov Monastery, where it is believed to be the final resting place of Vlad. On this full day trip enjoy an exclusive lecture on Dracula and Vlad the Impaler and decide between fact and fiction while passing through different stages of his life making it the most complete Dracula Day Trip in Romania.

Free wi-fi included in all our vehicles

Wear comfortable shoes for the walking portion of the tour