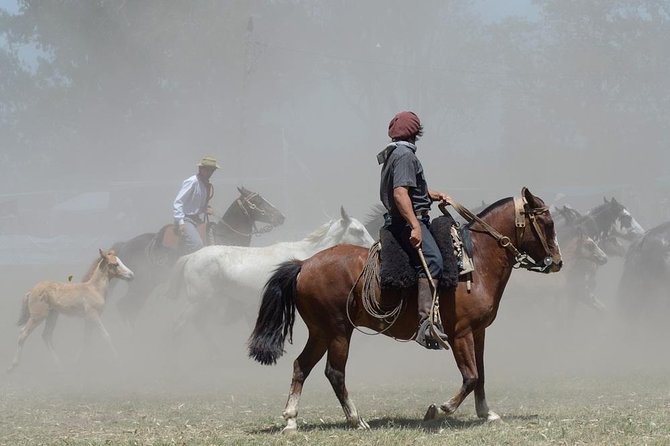 Immerse yourself in the best of Argentina's culture at a 'fiesta gaucha' (gaucho party) on this full-day shore excursion from Buenos aires! Visit Estancia Santa Susana, a traditional ranch located in Argentina's countryside. Long-time inhabitants of the Argentina plains, the gauchos (loosely rendered as South American cowboys) provide a fun-filled day of ranch activities at Santa Susana. Enjoy a traditional folk and tango show, horseback rides, a BBQ lunch with wine, and a demonstration of the gauchos' fantastic horse-riding abilities.

After your cruise ship docks in the Buenos aires port, your guide will accompany you to Estancia Santa Susana, located in Los Cardales. Travel by comfortable coach along a scenic drive through the Argentine pampas (plains).

When you arrive at the traditional estancia (ranch), you will be greeted with a welcoming reception at the ranch pub with empanadas and wine.

Continue your day of gaucho fun on a guided tour to some of Santa Susana's attractions, including its church and museum. Then, you'll have the opportunity to explore the grounds of the ranch while horseback riding or taking a horse-drawn carriage ride.

Afterward, enjoy a delicious parrillada (Argentine BBQ) lunch of grilled specialties such as chicken and sausage, accompanied by salad and beverages (red and white wine, soda, water and coffee). Then sip from a gourd of mate (a South American drink made from yerba mate leaves steeped in hot water) and complete your meal with a pastelito (pastry)!

During lunch, be enthralled by an entertaining tango and folk show of classical music and dance, and watch a thrilling boleadoras performance, with weapons thrown by gauchos. When you finish your meal, watch the gauchos show off their incredible ranch skills, such as a ring race (known as la sortija), animal herding and the cuadreras race, a typical gaucho game.

This excursion concludes within a 15-minute taxi ride to the cruise port, so you determine the time you return to your ship in Buenos aires. Please allow yourself ample time to enjoy the excursion and ensure your timely return to the port. This excursion is not covered by our worry-free policy.

This excursion is not covered by our worry-free policy

Please note: tour operator does not have the capacity to look after customers with luggage