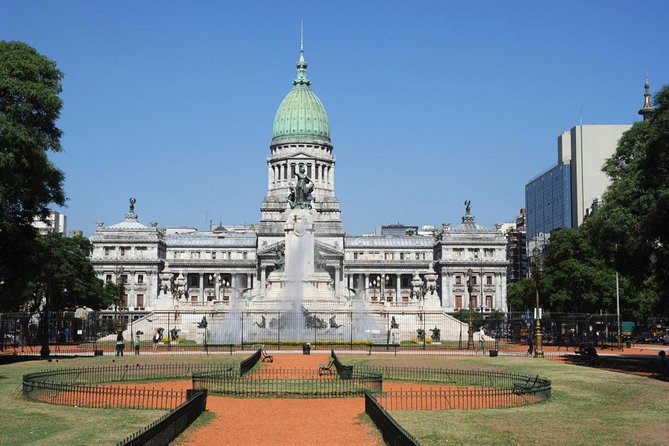 Experience the highlights of Buenos aires with a Super Saver that combines a three-hour city sightseeing tour with the best evening entertainment. Embark on a coach tour through Buenos aires fascinating neighborhoods such as Palermo, Recoleta, San telmo and La boca and get acquainted with the must-see spots. Then choose between Caf de los Angelitos or Tango Porteo for a splendid evening at a tango show with dinner!

Buenos aires Sightseeing Tour (Morning):Start your 9am sightseeing tour in the Retiro neighborhood of Buenos aires by hopping aboard your comfortable air-conditioned coach and relaxing as the city passes by. Youll drive past significant cultural and historical monuments throughout the citys distinct neighborhoods as your guide offers onboard commentary about each site.
Stop to take pictures of the Casa rosada a palatial building known for its pink exterior which houses the Argentine presidential office. In Plaza de mayo, your guide will point out the Metropolitan Cathedral and the Cabildo (town hall) before taking you to Teatro Coln, a lovely opera house built near Plaza de la Repblica and the Obelisco de Buenos Aires (Obelisk of Buenos Aires).
Back aboard the coach, drive through the waterfront district of Puerto madero, one of the citys oldest neighborhoods, en route to San telmo. Admire the well-preserved colonial architecture and dont be surprised to see a spontaneous tango performance at Dorrego Square. When you reach La boca, a neighborhood settled by Italian immigrants, soak up the colorful atmosphere of the pastel-painted buildings along the main drag the Caminito. Hop off the coach to see local artists display their work as you stroll along the pedestrian-only lane.
After re-boarding your coach, your guide will take you around in Recoleta, one of the citys most exclusive neighborhoods famous for Recoleta cemetery, elegant shops and open-air cafs.

Tango Show with Dinner (Evening):Revel in the sultry music and dance of Argentine tango during an enchanting evening at a classy tango club. Choose from Caf de los Angelitos or Tango Porteo (see below) and feel like youve been transported back to a time when tangos rhythms ruled the city of Buenos Aires. Watch professional dancers perform in stunning costumes and enjoy a delicious dinner Argentinean and international cuisine paired with a generous selection of wine for a truly memorable experience!

Tango Option 1: Café de los Angelitos
With more than 100 years exhibiting tango shows in Buenos Aires, Café de los Angelitos remains at the forefront of Argentine tango. Each night at this tango house, 21 distinguished artists enter the stage and take you through the history and passion of tango in an elegant way. You’ll enjoy exceptional service as you wine and dine while watching this riveting performance.
Tango Option 2: Tango PorteñoTango Porteño delivers you to the 1940s – the ‘golden age of Argentine tango’ – when it was performed on just about every corner of Buenos Aires. This venue recreates the ambiance and costumes reminiscent of the magical decade when the great orchestras – from Piazzolla to Pugliesse – challenged one another at the ballrooms of Chanteclair, Marabú, Tabarís and many others!

Pickup is from select downtown Buenos Aires hotels only

Pickup is not available for private residences