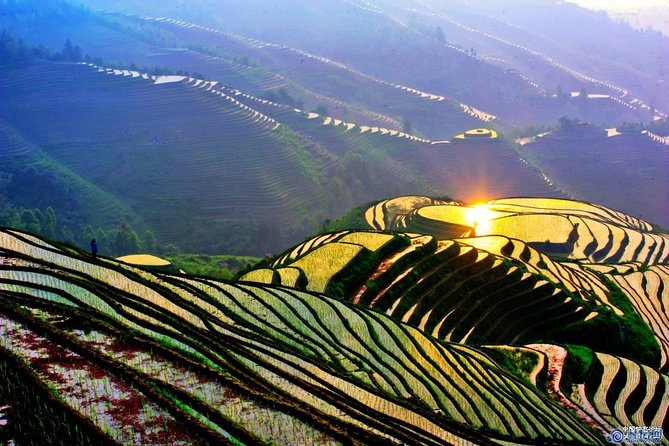 This 8-hour bus tour covers one of the highlights of Guilin, the famous Longji rice terraces. Discover the unique cultures and traditions of Guilin's tribal minorities, like the long-haired Yao women of Huangluo Village, and their distinctive architecture. Hike along the spine of Longji, or 'Dragon's Backbone', through stunning rice-terrace landscapes and passlocal Zhuang and Yao villages. Enjoy lunch at a local farmer's restaurant.
At the Long Hair Show at Huangluo Village, please be careful not to go to the stage to join their WEDDING GAME as you might be asked to pay CNY50 to buy a gift for the actress.
Traffic jams are expected during holiday seasons, so your time at the scenic spot may be shortened. In this case, you will have no time to climb and have to take cable car instead.

Expect pickup between 8am and 8:40am depending on your hotel location. It's about a 2-hour drive to the Longji scenic area, and there will be a restroom stop along the way.

You'll arrive at the ticket booth around 11am. Depending on group size, you may need to change bus for the 5-minute transfer to Huangluo Village. Stroll among the local wooden houses and enjoy a performance that shows you how the Yao women who live here brush, braid, and coil their spectacularly long hair in a traditional and beautiful way.

Afterward, drive to Dazhai village. Youcan choose to hike up to the top or take a cable car (at own expense),where the most dramatic rice terrace views are to be found. This is a reasonably challenging hike and moderate fitness is required.

Savor stunning views of this crafted agricultural landscape. Depending on the time of year, you may see layers of reflecting watery rice fields, lush green shoots, or a whole swathe of golden rice: in winter, the terraces mighteven be covered in snow.

You'll leave at or before 4pm, depending on traffic conditions, and arrive at your hotel around 6pm.