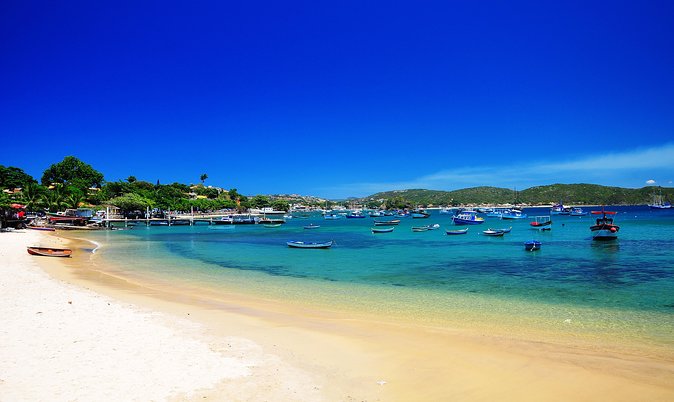 Take a day trip from Rio de janeiro to experience the cosmopolitan style, quaint charm and elegant architecture of Buzios. Walk through the town on a guided tour before there is free time to explore Buzios at your own leisure.

You will be collected from your Rio de janeiro hotel to cross the Rio-Niteroi Bridge for a 2:30 hour drive to the peninsula of Buzios. Arriving in Buzios, take a brief introductory walking tour through cobbled streets rich in history and charm. Once a quaint fisherman's village, Buzios has become a fashionable and sophisticated city while retaining its quaint village atmosphere. Enjoy free time to explore he famous Rua das Pedras (cobbled street) and check out famous stores, many souvenirs and good food.at your own pace.

If you choose the optional cruise, enjoy the Buzios coastline from a different perspective and on a different way. Behold beaches like Azeda and Azedinha, João Fernandes and João Fernandinho, Ilha Feia or Tartaruga Beach. Enjoy swimming at the stops and have a great time with cheerful boat staff. Drinks like caipirinha and food are available for purchasing. Water is included and free.

After the boat ride, visitors will meet for lunch at one of the best restaurants in Buzios. The lunch buffet (all you can eat) has several options. Drinks and dessert are not included. After lunch time, visitors will go to the meeting point at the Santos Dummont square at the time scheduled with the tour guide.

At the end of the day, visitors are returned to their hotels in Rio.

Note: If you choose the 'Cruise' option, please bring a swimsuit and a towel. Boat tour takes about 2 hours before it gets back to the city. The boat usually makes 03 stops for swimming and usually goes to the same destinations: Ilha Feia, Joo Fernandes Beach, Azeda Beach or Tartaruga Beach. The order and destinations depends on the wind and weather conditions.