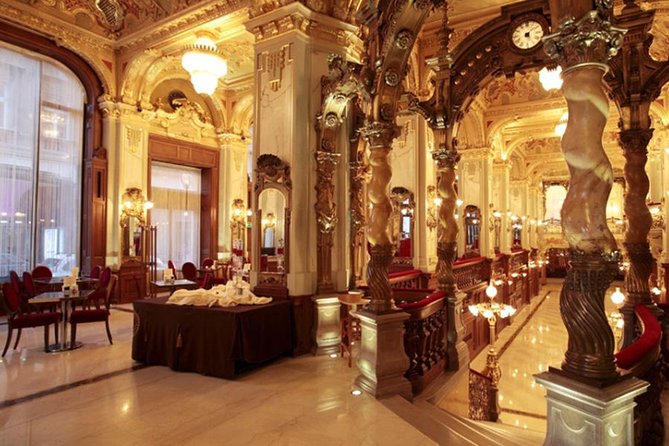 Our 3 hour walk starts at Vorosmarthy square, in the heart of the city. Our first cafe already gives us a deeper insight into the ambiance of Imperial Budapest. The Gerbaud with its exquisite interior, and more than 100 years of history, served as a central social hub for both tourists and locals during the late 19th century.

From Gerbaud we take the tram by the Danube to the Central Cafe, a space so dignified that it epitomizes what the cafe house culture really meant during the 19th century pinnacle of the Habsburg Empires economic and cultural power. The scenery, the delicate decor, the delicious meals, the delightful desserts and refreshing drinks give us a full taste of the atmosphere of a bygone cultures social rituals.

Next (and within walking distance), we move the Museum Caf, in operation since 1885. Prominent clientle were regularly entered in the guest book, now a historical document, including the names of many Members of Parliament, distinguished writers, and famous Hungarian actors. The lavish walls are covered in tiles from the world-famous Zsolnay porcelain works. Another unique feature is the grand 19th century Venetian Mirror.

After yet another short walk, we come to the Urania Cafe on Rakoczi street, which houses the oldest Film Theatre in the city, and which is famous for its lectures given by prominent intellectuals before large audiences of Budapest cosmopolitans.

From here we will walk towards Blaha Lujza tr, on the big boulevard to reach our next sight, the elegant New York Cafe, one of the most beautiful Cafe Houses in the world. We end our walking tour sitting down for a coffee and cake in the Muvesz Cafe on Andrassy Boulevard, near the Opera House, hoping to catch a glimpse of the citys celebrity actors and actresses, who regularly patronize the venue during their rehearsal breaks from the nearby Budapest Broadway.

Price of refreshments, cakes and coffees selected at various cafes