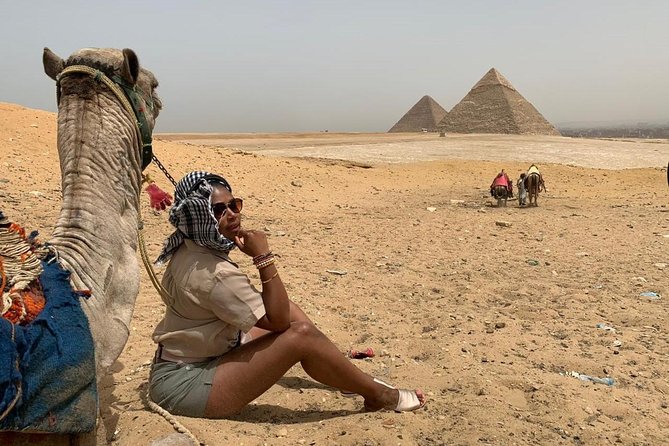 Have the day you've always dreamed to have by visiting the magnificent Pyramids of giza, the famous Sphinx , Head to The egyptian museum where you will discover Tutankhamun's treasures and more. and then to the oldest pyramid in the world - Sakkara Pyramid.

You will be picked up from your hotel in either Cairo or Giza by your tour guide to start your full-day Giza tour. Visit the Great Pyramids of giza,Cheops, Chephren and Mykerinos, andthen head toValley Temple,the Place where priests mummified the dead body of King Chephren. You can also havea closer look at theSphinx here, the legendary guardian that stands by the huge funeral complex with its lion body and the head of King Chephren.

Then, continue your day tour toSakkaralocated only 27 kilometers southwest away from Cairo. Visit the Step Pyramid (built for King Zoser). It is considered an important part in the process of the pyramid evolution, which were made from the simple mastabas to its widely known form.

Then, continue your day tour to downtown Cairo to visit the famous Egyptian Museumfeaturing artifacts from the Pharaonic and Romanic period. The museum displays a rare collection of 5000 years of art which is considered the largest most precious collection of Egyptian art in the world. Over 250,000 genuine artifacts are presented including an exhibit dedicated to the Tutankhamen collectionof treasure, gold and jewelry which was enclosed in his tomb for over 3,500 years before it was discovered in the 1920s when his tomb was discovered. At the end of the tour, you will be transferred back to your hotel.