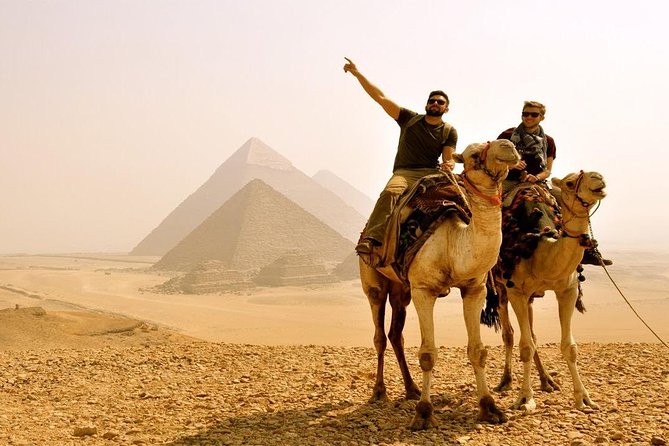 Cairo-egypt">Cairo Layover Tours Visit Giza Pyramids,Memphis,Sakkara,Dahshur Pyramids & Khan Khalili Bazaar from Cairo airport StartsAt 8:00 am or earlierwith Pickup from Cairo international airport by our Expert Tour guide who will greet you with a sign shows our guest name on it then transfer in Private A/C Vehicle to Start your Cairo layover Tours VisitGiza Pyramids & Sphinx,Sakkara Pyramid or Step Pyramid,Memphis City,Dahshur PyramidsOld Bazaar of Khan Khalil
The tour could be sharing with others if there other guests booked it on same date

StartsAt 8:00 am or earlierwith Pickup from Cairo international airport by our Expert Tour guide who will greet you with a sign shows our guest name on it then transfer in Private A/C Vehicle to Start your Cairo layover Tours VisitGiza Pyramids & Sphinxwhere you can see 9 pyramids at that sight, the most important one is the great pyramid of the king Cheops which considered as the highest pyramid have ever built in Egypt and one of the seven wonders of ancient Egypt, also you can see 9 pyramids at that area, Sphinx which represents king Kefren that his head as head of a human being and a body of lions animal, the valley kings which specialized for the highpriestto make The mummification process of the king inside

Then Continue your Cairo Layover Tours to VisitSakkara areawhere the first trial to build a pyramid shape tomb which coming by king Djosser the 1st user of limestone at this area it also known asSakkara Pyramid or Step Pyramid,you will also have a look at the specious court specialized for Heb-Sed celebrations for the king, this area also including the cemetery of the nobles and official officers which very rich with pharonic decoration, drawings and paintings.

Then transfer to Local restaurant totake your lunch.lunch is includedin your programbut beveragesis not included

Then you will be transfer to the last sight-seeing in that program where it`sMemphis Citywhich was the 1st and oldest capital city of Egypt during ancient time which was the living city for Egyptian starting from 1st dynasty till 10th one which located at the eastern bank of the river Nile,it has some masterpieces butting them open air such as statues of king Ramsis 2nd and god Ptah ,goddess Sekhmet,baskets for burning the incense ,coffins and Egyptian calendar

Then Continue your Cairo Layover Tours to VisitDahshur Pyramidswhere the 1st true pyramid have ever built by King Senfrue the founder of the 4th dynasty of pharonic period, at the beginning he made a Bent pyramidbut he did the same trial again afterwards to make his tomb took the shape of the pyramid and he successes at the 2nd trial to make the 1st true pyramid in ancient time that was also known asthe Red Pyramid. He also was the father of the king Cheops the owner of the Great Pyramid at Giza
Then Continue your Cairo Layover Tours to

End your Cairo Layover Tours by a Visit to Old Bazaar of Khan Khaliliwhere it`s a market place for the foreigners coming from many different places to sell their own products on it during Islamic empires time here in Egypt, but right now it become a touristic place which has a lot of shops selling the Egyptian souvenirs and also has a lot of coffee shops where you can take a rest on it after that lovely tour which serving Shisha.Also this area has the most unique mosques asEl Azhar mosque and El Hussen mosque.

Then you will be transferred Back to Cairo international airport

any Optional Tours i.e entering any of the Pyramids it Requires additional Tickets can be bought during the visit(Ticket of inside the great Pyramid 22.50 $, Ticket of the Middle Pyramid 7.50 $, Solar Boat Museum 7.50 $, 1 Hour camel ride around the pyramids 20$, 30 minutes Camel ride 10 $,1 hour quad bike trip at the wide desert of Giza Pyramids 25