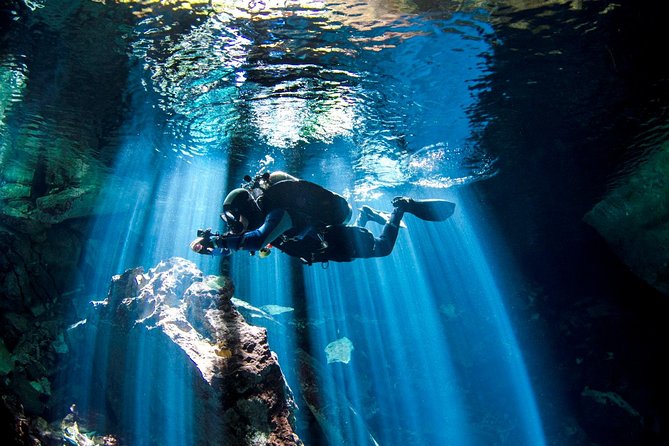 Spend a day in Puerto Aventuras exploring the underwater world of cenotes, the largest underground cavern system in the world. See the fascinating limestone structures in these caves beneath the waves, all just a short distance away from Cancun. Swim around submerged stalactites and stalagmites, and see the spectacular, natural phenomenon of haloclines, a blending of fresh and salt water, all safely lead by an expert guide.

Explore the Yucatans famous underground cavern system with an expert guide. Plunge beneath the waves on a 2-tank cavern dive of Cancuns cenotes, sinkholes that lead to massive underwater caverns. Just like the caverns on land, cenotes have interesting topographic features including stalactites, stalagmites and haloclines, an aquatic phenomenon that occurs from fresh water sitting on top of salt water, creating a spectacular, swirling, filmy effect.

Your guide will lead you into the depths of this magnificent underwater world and explain how the cenotes were central to the life of the Mayan. They provided the Yucatans indigenous people with water, hiding places and ceremonial venues. After youve plunged to the depths of the cenotes, lunch is included at a small palapa lunch area.

Please note: this dive is for certified divers only. The caves visited areCavern Chickin Ha on Mondays, Tajma Ha on Wednesdays and Saturdays and Dos Ojos on Fridays (additional fee applies).

Wetsuit and use of diving equipment

Dos Ojos admission fee (US$20 per person) (Fridays only)

Important: This tour is not available for Junior Open Water certified divers

Please note: this dive is for certified divers only. Evidence of dive certification is required from all divers wishing to participate in a certified dive

Please note: if going to Dos Ojos, there is a separate admission fee of US$20 per person not included in tour price (Fridays only)