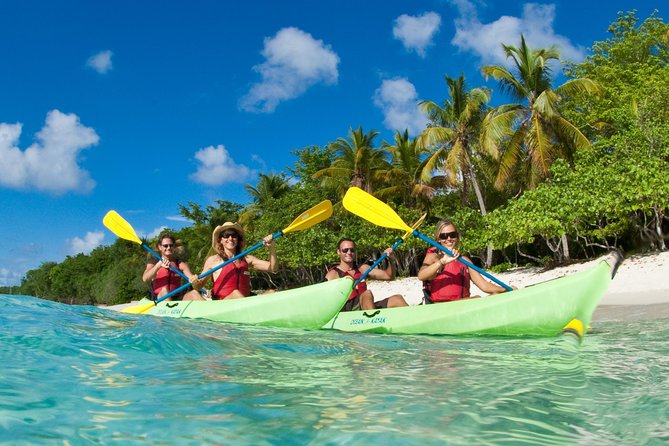 Discover the beauty of St. John on a Kayak, Hike and Snorkel tour of Caneel Bay. Kayak in the turquoise waters of the Virgin Islands National Park, a UNESCO World Heritage site, snorkel in grass beds often frequented by sea turtles, and hike the picturesque Lind Point Trail. Choose from a 3- or 5-hour tour (the latter option includes lunch), with guided instruction and equipment included. With breathtaking views and informative commentary, this outdoor adventure is fun for nature enthusiasts and families alike!

Meet your professional nature guide at Caneel Bay Resorts Honeymoon Beach for a full safety briefing before taking to the sapphire-blue waters! Once you receive paddling and snorkeling instructions along with your lifejacket, hop on your kayak for a thrilling paddle around the bay teeming with colorful tropical fish. With Virgin Islands National Park as your backdrop, marvel at the coral reef home to an abundance of marine life.
Next, explore five of St Johns best beaches on a hike across white sand, shaded by sea grape trees, coconut palms and tropical forests. You'll journey through the picturesque forest trails of Turtle Point, home to more than 800 native species of plants, while your informative guide points out local flora and fauna along the way.
Enjoy stunning views above the rocky outcrops looking toward Hawksnest Bay and the Durloe Cays, an area known for dolphin sightings, and keep an eye out for the wild donkeys, mongoose and white-tailed deer that frequent the area.
Then, snorkel a fringing coral reef in the shallow, clear waters as your guide points out the many different types of coral in this UNESCO Biosphere Reserve. While snorkeling in a bed of sea grass, dont be surprised if you come face to face with a sea turtle or stingray! After your tour, return to Honeymoon Beach at Caneel Bay Resort.
Please note: The activities on this tour will be adapted to your preferences and athletic ability.
Option 1:If you select the 3-hour option, choose from a morning or afternoon departure, including beverages and snacks.
Option 2:If you select the 5-hour option, youll depart in the morning and enjoy a complimentary picnic lunch from a local deli.

Option 1: 3-hour tourChoose from a morning or afternoon departure, including beverages and snacks.
Option 2: 5-hour tourDepart in the morning and enjoy a complimentary picnic lunch from a local deli.

All gear and equipment