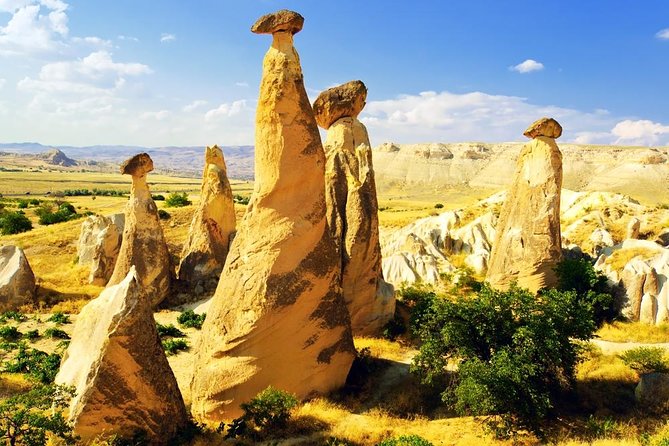 See some of the best of southern Cappadocia on this full-day tour from Istanbul, including round-trip transfers, flight, and lunch. Explore this strange-but-beautiful UNESCO-listed region with its fairy chimney rock pillars, cave villages and subterranean cities. Walk through stunning Rose Valley; Zelve into Kaymakli Underground City; see the abandoned village of Avanos, and explore Ortahisar Castle and Pigeon Valley, with its rock dovecotes. Enjoy in-depth attention from your expert guide on this small-group tour limited to 20 people.

Leave your central Istanbul hotel in the early morning for your transfer to Istanbul airport. Board your flight to Kayseri International Airport and on arrival, travel to Cappadocia by air-conditioned minivan.

After roughly 1.5 hours, arrive at Rose Valley, named for its rose-colored rocks that change hue through the day. Enjoy a leisurely walk in this beautiful valley, passing its mushroom-shaped fairy chimneys, jagged peaks, and leafy vineyards and orchards. On route, visit the valley's cave churches, some dating back to the 8th or 9th centuries, and listen to tales of how they were used by early monks.

Next, visit old Avanos - an abandoned rock village known for its old Christian churches and houses. Take photos of the eerie houses, and gaze at the Basilica of St John the Baptist that sits on a cliff high above the village.

Stop for lunch at a local restaurant (see the Itinerary for a sample menu) and then delve into the town of Ortahisar, to view its crowning glory, Ortahisar Castle. Marvel at this unique 295-foot (90-meter) high fortress, with its honeycomb of rock caves carved during Byzantine times. Explore some of the burrowed-out chambers and storage rooms and soak up the panoramic views of the town below.

Drive to Kaymakli Underground City, one of the best-preserved in Cappadocia. Roam this subterranean network of homes, stables, cellars, and kitchens and learn how it was used by early Christians to escape persecution.

Next, visit Pigeon Valley, known for its pigeon houses carved from the cliffs and rocks. Explore the spectacular dovecotes and learn how the locals used to house their pigeons here to farm their droppings for fertilizer, and later, return to Kayseri Airport for your flight to Istanbul. Your tour ends with a hotel drop-off this evening.

Please note: Ortahisar Castle is currently being renovated, entrance will not be permitted.

Round-trip flights from Istanbul to Kayseri or Nevsehir Airports

Passport name, passport numbers, expiry Date and date of birth required at time of booking for all participants