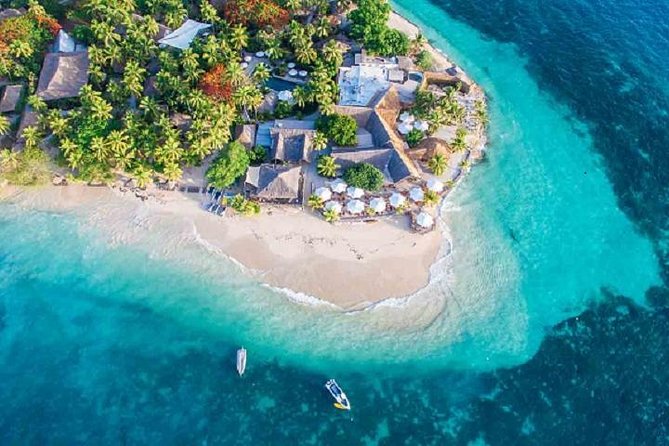 Spend a full day relaxing on an idyllic tropical island with other day cruise guests.
Departs Daily. A free Nadi/Denarau return coach transfer to/from Port Denarau and transfer to the Castaway in our modern catamaran that have air-conditioned lounges, outside viewing decks and fully licensed bars, meaning youll feel on holiday, even enroute to your island escape!
Cruise to Castaway Island and laze in the sun beneath swaying palms on a golden sand beach. Snorkel straight off the shore into crystal clear waters and over vibrant coral reefs thriving with marine life. Other non-motorised water sports and activities available include kayaks, catamarans and windsurfers. Resort facilities include a freshwater swimming pool, three bars, resort boutique, island massage and a range of water sports (additional charge).
Enjoy the expansive views while dining beachside at the Terrace Restaurant for lunch. Come late afternoon, return to Denarau, cruising past the scenic Mamanuca Islands

You'll cruise out to Castaway on our high speed catamaran. The beauty of the resort with its perfect white sand and swaying palms stretches before you as you are welcomed ashore. Enjoy lazing in the sun beneath the trees and wander along the soft sand. Snorkel straight off the beach in the crystal clear waters and over vibrant coral reefs.
An island massage experience or the use of motorised and non-motorised water sports equipment including kayaks, catamarans and windsurfers is available for an additional charge. Resort facilities include a freshwater swimming pool, three bars and a resort boutique.
On the return cruise to Denarau you'll take in the sights of other islands in the Mamanuca group.

You must contact South Sea Cruises at least 24 hours before your activity date to confirm your reservation and arrange Transport. Use the contact details on this voucher. Upon check in please present your confirmation or voucher in exchange for your tour boarding pass

All passengers over the age of 17 are required to be fully vaccinated against COVID-19 with a WHO-recognized vaccine. Customers will need to complete and submit a pre-cruise health declaration form & provide a form of Government-issued evidence of their COVID-19 vaccination status at check-in.