Cathedrals And Churches Of The Russian Capital - Moscow

Cathedrals And Churches Of The Russian Capital - Moscow 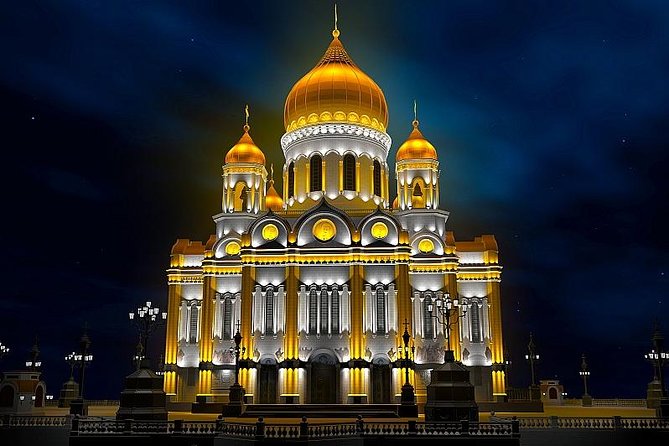 We invite you to visit the most important and beautiful Churches and Cathedrals of the Moscow City!
Your first stop is New Maiden Convent probably the best known cloister of Moscow. There are lots of legends and stories about this convent. It actually looks alike the medieval fortress and often Muscovites call it the mini-Kremlin.
Next we will take you to the Cathedral of Christ the Savior. It was built as a national monument to express the nations gratitude to Christ Jesus for saving Russia.
Last visit will be to Saint Basil Cathedral, the most famous sites on Red Square. Built in 16th century t to commemorate Ivan the Terribles conquest of Kazan the Cathedral in fact is a group of nine churches or chapels that sit on one foundation.
After that we will bring you to the hotel.

Russian Orthodox Church is largest autocephalous, or ecclesiastically independent Eastern Orthodox Church in the world. Its membership is estimated at between 40 and 80 million!
There are 12 towers that were made to be looked like the Kremlin Towers. Inside the convent you can find 14 buildings and 8 of them are the cathedrals. An important Moscow attraction and UNESCO World Heritage Site.

The Convent is linked with Russia's historic, cultural, and religious development. It has acted as a prison, an orphanage, a hospital, a refuge, a religious institution, and a museum.

It was used by women of the Tsars family and the aristocracy. The convent provides an example of the highest accomplishments of Russian architecture with rich interiors and an important collection of paintings and artefacts.

Cathedral of Christ the Savior.

One of the most imposing and controversial buildings in Russia, the resurrected Cathedral of Christ the Savior has had a short but turbulent history. The enormous - and extremely expensive - cathedral was eventually consecrated in 1883, and its vast copper domes dominated the Moscow skyline. However, the cathedral had taken almost as much time to build and to decorate as it would remain standing in its original incarnation. It was singled out by the Soviet government for destruction and, in 1931, blown to pieces to make way for a proposed Palace of Soviets.

The symbolic significance of the site was reaffirmed after the fall of the Soviet Union, when ambitious Moscow Mayor Yuri Luzhkov joined forces with the Orthodox Church to resurrect the cathedral in a $360-million reconstruction project which was completed in 2000.

The interior decoration is breathtaking, the cathedral being adorned with elaborate frescoes which extend over the entire surface of the walls.

Every capital has a well-known landmark making it easily recognizable. In Moscow, the Cathedral of the Protecting Veil of the Mother of God, better known as the Cathedral of St. Vasily the Blessed (or St. Basils Cathedral, as it is often called in English), standing in Red square is such a landmark. It is for nearly 450 years now that this architectural ensemble of inimitable beauty and grandeur has been filling our hearts with joy, excitement and pride.

Can you believe that the cathedrals original color was said to be white to match the white stone of the Kremlin? Starting in the 17th century, the faade and domes began to be painted in the remarkable colors that are seen today, and the pigment is said to be taken from a Biblical description, in the Book of Revelation, of the Kingdom of HeavenYou will know much more amazing fact about history of the cathedral by the end of the tour.

Entry/Admission - Cathedral of Christ the Saviour