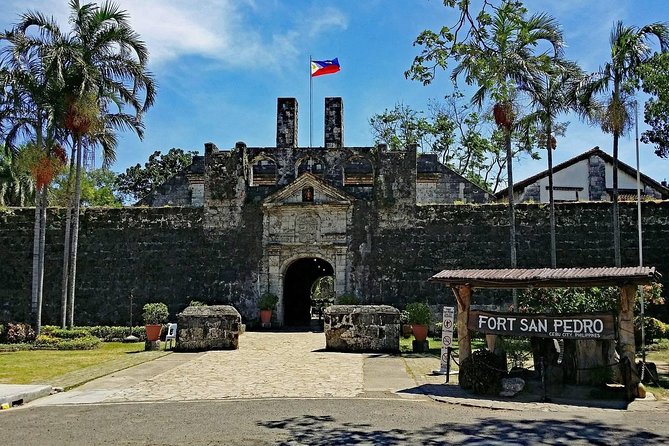 Looking for the best experience when exploring the scenic and historical setting of Cebu? Cebu City Tour Provides Quality Content for Tourism and business in the whole Island of Cebu.

Itinerary
This is a typical itinerary for this product
Stop At: Fort San Pedro, A.Pigafetta, Cebu City 6000 Philippines
Fort San Pedro is said to be the oldest and the smallest fort in the Philippines, covering an area of 2,025 square meters. Its walls are 20 feet tall and 8 feet thick, forming a triangle with uneven lengths: two sides face the sea and the other the land, where the current entrance gate to the fort is located.
Duration: 45 minutes
Stop At: Magellan's Cross, Cebu City Philippines
Nio Basilica Minore, Magellan's Cross is a huge wooden Christian cross that marks the arrival of Portuguese explorer Ferdinand Magellan in the island of Sugbu (now Cebu) roughly 500 years ago. ... Magellan planted the cross to signify this important event.
Duration: 30 minutes
Stop At: Basilica del Santo Nino, Osmena Boulevard, Cebu City 6000 Philippines
Basilica Minore Del Sto. Nino is the oldest Roman Catholic church established in the Philippines. It was built on the same spot where the image of the Sto. Nino de Cebu, a statue depicting the Child Jesus, was found in 1565 by Spanish explorers led by Miguel Lopez de Legazpi.
Duration: 45 minutes
Stop At: Taoist Temple, Beverly Hills, Cebu City 6000 Philippines
The Taoist Temple is the center of worship for Taoism, the religion which follows the teachings of the ancient Chinese philosopher, Lao Zi. In the temple, devotees perform rituals. One ritual is where one prays to the gods to grant one's wish.
Duration: 45 minutes
Stop At: Cebu Heritage Monument, Colon Street, Parian Plaza, Cebu City 6000 Philippines
The Heritage of Cebu Monument is a representation and illustration of sculptures depicting significant and symbolic events in the history of Cebu back from the time of Rajah Humabon to the recent beatification of the Cebuano martyr, Pedro Calungsod. The monument was built by the local artist, Eduardo Castrillo.
Duration: 45 minutes