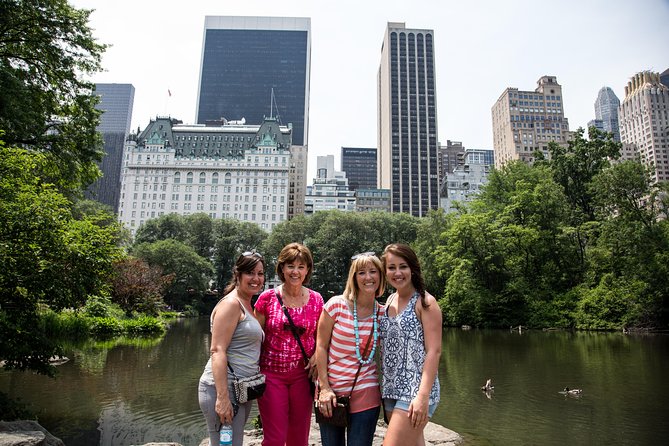 Visit more than 30 movie locations in Central Park on this walking tour, perfect for film buffs and first-time visitors alike. Visit the Wollman Rink, the Bow Bridge, the Carousel, the Naumberg Bandshell, Strawberry fields and more to see where famous movies such as 'Serendipity,' 'Breakfast at Tiffanys,' 'The Avengers,' 'When Harry Met Sally,' 'Ghostbusters' and 'Sex and the City' were filmed. This is a unique, interesting and fun way to experience Central park and its many attractions.

Meet your guide in Central park in the afternoon to begin your walking tour. Your insider guide -- an actor or actress with an expertise in film or TV -- will take you on a leisurely 2-hour stroll through the park to visit more than 30 filming locations from your favorite movies and TV shows.

See The stone Gapstow Bridge, featured in Home Alone 2, and see the famous 19-Story Plaza hotel, which has been featured in several films including Barefoot in the Park, Brewsters Millions, It Could Happen To You, Big Business, Crocodile Dundee, Almost Famous and King of New York.

Next, visit the Wollman Skating Rink, featured in Serendipity, Stepmom, The January Man and Love Story. Continue to arguably the best-known attraction in Central park, the Carousel. For just USD $2 you can enjoy a ride on the carousel featured in The Producers, The Spanish Prisoner, Up the Sandbox and Im Not Rappaport.

See the beautiful Victorian building known as the Central park Dairy, as seen in Independence Day. Stroll through the Mall, also known as the Promenade, an area popular for socializing and relaxing. Movies such as Vanilla Sky, Breakfast at Tiffanys, Big Daddy and Kramer vs. Kramer all had scenes that shot featured here.

Spot the Bethesda Terrace, with the famous Bethesda Fountain located in the middle, and the restaurant at the Loeb Central park Boathouse, featured in films such as When Harry Met Sally, Sex and the City, Little Manhattan and in the final scene of The Avengers.

Other sites you'll visit are the Bow Bridge, featured in films such as Autumn in New York, Keeping the Faith, The Way We Were and Woody Allen's Manhattan; the Naumberg Bandshell, featured in Im Not Rappaport, Mighty Aphrodite and Hair; and Cherry Hill, whose beautiful springtime cherry trees make you feel as if you're part of a scene in The Mirror has Two Faces, and Cruel Intentions.

Next, venture through Strawberry fields, which was dedicated to John Lennon after his death, and continue to Sheeps Meadow and Tavern on the Green, the restaurant that appeared in New York Stories, Wall Street, Made and The Out of Towners.

Your tour ends at Columbus circle, where Taxi Driver, Ghostbusters, Borat and Enchanted were shot.

Maximum of 35 people per tour group

Infant rates apply, provided they do not occupy a seat