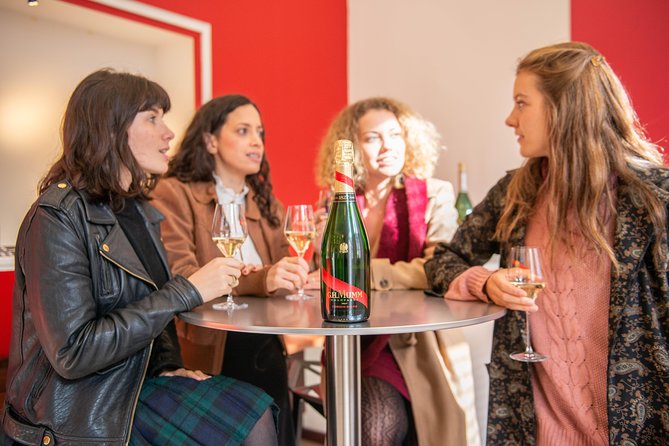 Enjoy a glass of bubbly as you spend a day in the famous region of Champagne on a day trip from Paris. With its magnificent vineyards, impressive heritage and world class champagnes, the region makes a great excursion from the French capital. ExploreNicolas Feuillattecellars( or similar) in Epernay. Also visit Mumm Champagne House and Reims Cathedral.

Visit the sacred town of Reims, known for its role in consecrating the kings of France as well as its importance to the Champagne regions sparkling wines.

In Reims, your guide will take you on a tour of the citys famous Gothic cathedral.

Followed by a trip to the world-renowned Mumm champagne cellars for a tour and tasting of Mumm Houses Cordon Rouge champagne. After your visit at Mumm Cellars,you will get some freetime for lunch to stroll through the city centre of Reims.

In the afternoon, your tour continues on through the picturesque landscape of vineyards and rolling hills to the town of Epernay, the main entrept for the regions sparkling wines. Here, youll visit the prestigious wine cellars of Nicolas Feuillatte( or similar cellar) for another tasting session. After your trip to Epernay, your coach will return you to central Paris.
Please note: The schedule and cellars visited are subject to change without notice, dependent on the season.

Visit of the Reims Cathedral

Wide choice of restaurants and cafs to have a typical French lunch.

Possibility of purchasing champagne, wine and accessories after the visit.