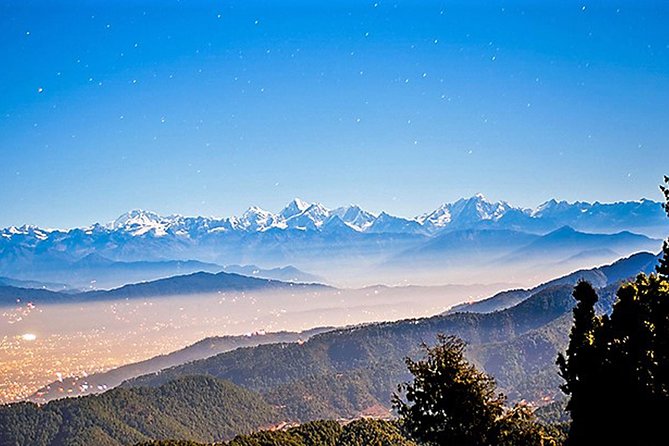 Situated at an altitude of 2551 meters from the sea level, Chandragiri Hill is developed as a newest tourist destination in the Kathmandu valley since the cable car service came into an operation in August 2016. The hill lies on the South-West of Kathmandu Valley is just 14 kilometersfrom the main centerof Kathmandu City. Towering peaks and breath taking views of the entire Kathmandu Valley covered with lush green blanket of flora makes Chandragiri truly a unspoiled landscape. The panoramic views of Kathmandu Valley andHimalayan ranges from Annapurna to Everest makes any one believes like viewing the whole Nepal from here.
Highlights:
Experience of Cable Car riding or alternatively hiking to the top of Chandragiri hill
Magnificent views of Manaslu Ganesh Himal, Langtang , Gauri Shanker and Everest Ranges,
Visit Valeshwar Mahadev Temple.
View of Entire Kathmandu Valley

Day trip to Chandragiri hill has been popular for day excursion since the establishment of cable car. The distance form he bottom to the top is 7 kilometres. From the top of the Chandragiri hill, you will see the stunning view of the chain of the mountains Fish Tail 6997 meters from the left to Manaslu 8167m, Ganesh Himal and Langtang range to right. In a clear day, peak of Mt Everest 88848 m can also be identified with the special binocular. You will see the breathtaking view of the entire valley of Kathmandu.

According to the history the hill started in 300 BC when last Shruthakevali Bhadrabahu and Chandragupta Maurya visited the place in order to attain religious peace. The small hill derives its name of Chandra from the fact that Chandragupta was the first of the rishis (the holy man) who lived and performed penance there.

Kalbappu was the early name of the hill and it dominates the history of the town of Shravanabelagola between 3rd century BC and 12th century AD. The Jain traditions link the Maurya Empire Emperor Chandragupta and his teacher Bhadrabahu with this place. 92 are located on the Small Hill out of the total number of 106 memorials found at Shravanabelagola,. Of these, about 47 memorials of monks, 9 of nuns, and 5 of householders belong to the 7th and 8th century. This points out at the popularity of the custom, and of its extensive prevalence on the Small Hill.

As per Hindu Mythology, this is believed to be the place where Satidevis forehead was fallen off her body when lord Mahadev carried her dead body. Also, it is believed that because of the blessing of Ichhyashwor Mahadev, King Prithvi Narayan Shah was successful in taking over the Kathmandu Valley.

Transport by private Car and Driver