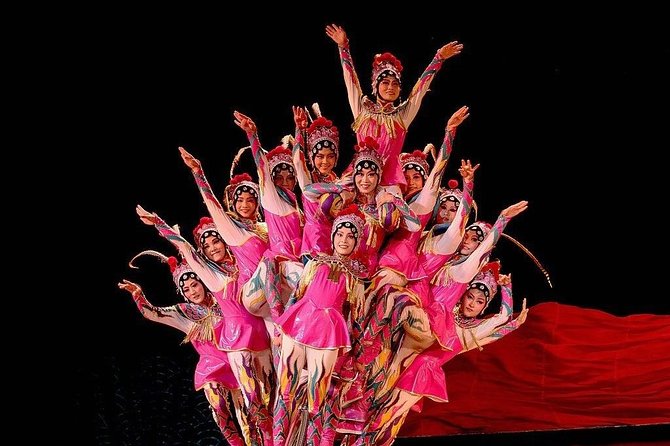 Acrobatics is one of the oldest performing arts practiced in China and the spectacular skills honed over centuries are on display in this entertaining show. The young acrobats perform astonishing stunts and feats of dexterity that you will definitely have to see to believe. Often compared to the Cirque de Soleil, the Acrobatics show at Chaoyang Theatre will have you enthralled as the highly skilled performers in spectacular costumes go through their highly original and breathtaking routines.

The Beijing Acrobatic Show is an awesome spectacle perfect for kids and adults alike. It starts at 7:00 pm every day at the Chaoyang theater, and last for around 60 minutes.

You should arrive to the venue 30 minutes before the show to get your tickets. The address is: No.36 North of Dongsanhuan Chaoyang District, Beijing.

When you arrive to the theater, go to the ticket office on the right side of Chaoyang theater. Show them your voucher number and your name, and you will receive your real tickets. If you wish, there is an option of private pickup and drop-off transfer from your hotel, so you wont have to worry about anything except enjoying an unforgettable show.

Once the show starts, you will enjoy a magic and breathtaking night of Chinese acrobatics, including gravity-defying contortionism, juggling, unicycling, chair-stacking and plate-spinning acts, and a lot more!

Hotel pickup and drop-off (Unless option with transfer is selected)

For Ticket Purchases Only: To get your entrance ticket, please go to the ticket office on the right side of Chaoyang Theatre. Please inform them of your Booking Reference/Confirmation Number and the Full Name used during booking.

For Ticket Purchase + Roundtrip Transfer: Your driver will pick you up from your downtown Beijing hotel around 5:30 PM and 6:00 PM. You will be informed of the exact time before by the driver. You also need to get your entrance tickets from the ticket office by informing them of your Booking Reference/Confirmation Number and the Full Name used during booking.

If you need to change dates, please contact the listed emergency number. Please do not go directly to the theatre to change your tickets

Chaoyang Theatre address is: No.36 North of Dongsanhuan Chaoyang District, Beijing. In Chinese it is , "" - 36