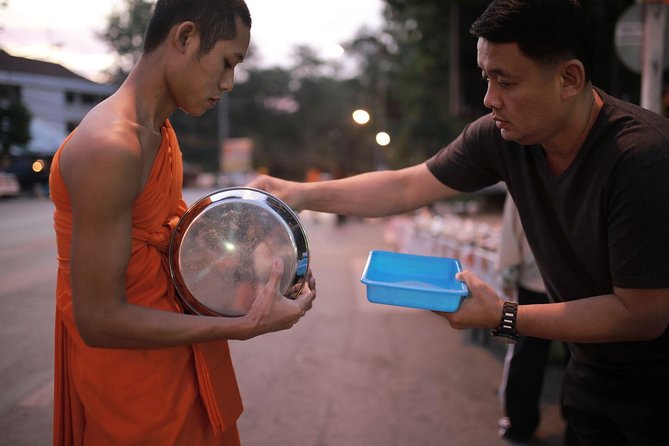 Be spirited away on this early morning Chiang mai tour which puts you at the epicentre of Buddhist rituals. Learn all about Dharma, chat with monks and ask them questions about their lives and their beliefs. Offer them alms and make an offering at a temple - this is a spiritual adventure for the seekers.

Get up close and personal with Chiang mai's Buddhist way of life on this cultural Chiang Mai tour for adventurers and soul seekers.

Start your Chiang Mai tour with a scenic drive in aSongthaew- an iconic public bus. As you make your way down Suthep Road, stop by Kad Ton Payom, a flea market well known for its northern Thai cuisine. Afterwards, offer alms to monks to make merit, then enjoy alocal Chiang Mai breakfast.

Next we'll make our way to Wat U-Mong, a 600-year-old temple famed for its large painted pagoda and underground tunnel. Soak up the peaceful atmosphere of this forest temple and perhaps take the opportunity to talk about Buddhism.

From there, our Chiang Mai tour will pay a visit to Wat suan dok temple, where you can mingle with monks and learn about their way of life. Take some time out to learn Dharma and cap the day off by making an offering to the Sangkha.

Local transport during the tour

Children below the age of 6 are not permitted on this tour.