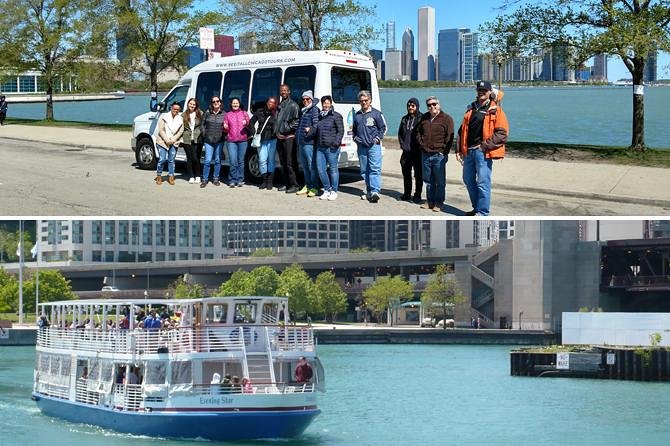 See the famous landmarks of Chicago on a small-group, 2-hour guided tour of the city! Riding comfortably ina temperature-controlled minibus with luxurious seats and oversized windows for excellent viewing, your guide will lead you through downtown and several Chicago neighborhoods, making postcard-worthy photo stops at Museum campus (which boasts the best view of the Chicago skyline),at The Rookery (one of the first skyscrapers. The lobby was designed by legendary architect Frank Lloyd Wright)The loop, along the Chicago river and at the Buckingham fountain (seasonal).

As you admire the world's first skyscrapers of downtown Chicago, also known as the Loop, and take in stunning views of Lake michigan, your guide will provide historical and informational commentary and answer any questions you have. A drive through The Gold Coast (home of the original Playboy Mansion) and Lincoln park round out the sights. This must-do city tour has won Chicago's Concierge Preferred award two years in a row.

Upgrade:For more sightseeing, this Time by water, upgrade your tour to include a Chicago River Architecture Boat Tour! This 75-minute, open-top boat cruiseprovides an in-depth look at the architecture of Chicago, as well as the opportunity to learn about the role the river has played in the citys history.

• The Loop, home of the theater district and the world's very first skyscrapers
• Willis Tower, tallest office building in North America
• Chicago Board of Trade, statue of Ceres, Goddess of Grain*
• The Rookery, 1886 skyscraper. You'll go inside to see the Frank Lloyd Wright designed lobby*
• Wacker Drive, parallels the Chicago river for great views of: The Wrigley Building (the beautiful building that chewing gum built); Marina City (think beginning of the Bob Newhart Show); and Tribune Tower (incredible home of the Chicago Tribune, WGN, and pieces of landmark from around the globe*)
• Art Institute of Chicago, a must see for every Chicago visitor
• Chicago Cultural Center, The People's Palace, home to free concerts, art galleries, and more
• Millennium Park, home of 'the bean' (cloud-gate), the Crown Fountain, and the Frank Gehry designed Pritzker Music Pavilion
• Grant Park, Chicago's front yard, a 200 acre park full of festivals, gardens, and lots of downtown green space
• Buckingham Fountain, the centerpiece of Grant Park, famous for being in the opening credits of the TV show, Married with Children*
• Museum Campus, home of the Field Museum, Adler Planetarium, and Shedd Aquarium*
• Route 66, the eastern end of the cross country highway that connected Chicago to Los Angeles
• The Magnificent Mile, one of the world's premier shopping destinations
• Rush Street/Gold Coast, great restaurants, historic residential area, former haunt of gangsters like Al Capone as well as the Rat Pack
• Original Playboy Mansion, home of Hugh Hefner and friends from 1959-1974
• Lincoln Park, 1,600 acre park and northside neighborhood. The St. Valentines Day massacre went down here in 1929
• Lincoln Park Zoo, as well as the gardens and conservatory
• Lake Shore Drive, about as scenic as an urban roadway can be, offering beaches, Navy Pier, Lake Michigan, and more
• * = tour stop

Hotel pickup and drop-off to most downtown Chicago hotels

You MUST contact the local supplier to reconfirm your reservation