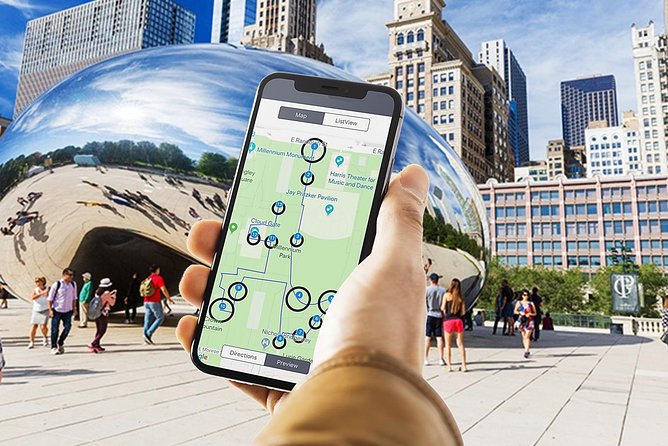 Learn how architects, artists and engineers collaborated with Chicagos movers and shakers to transform a railroad yard and parking lot into a magnificent park that has thrilled millions and become the envy O|hare international airportf cities around the world.

After you book the tour, we will send you the APP and the TOUR PASSWORD.

Itinerary
This is a typical itinerary for this product
Stop At: Jay Pritzker Pavilion, Millennium Park, Chicago, IL
Jay Pritzker Pavilion, also known as Pritzker Pavilion or Pritzker Music Pavilion, is a bandshell in Millennium Park in the Loop community area of Chicago in Cook County, Illinois, United States. It is located on the south side of Randolph Street and east of the Chicago Landmark Historic Michigan Boulevard District.
Duration: 5 minutes
Stop At: Lurie Garden, Millennium Park, Chicago, IL
Lurie Garden is a 2.5-acre garden located at the southern end of Millennium Park in the Loop area of Chicago in Cook County, Illinois, United States. Designed by GGN, Piet Oudolf, and Robert Israel, it opened on July 16, 2004. The garden is a combination of perennials, bulbs, grasses, shrubs and trees.
Duration: 15 minutes
Stop At: Chicago Skyline, Chicago, IL 60601
As you stand in the middle of Lurie Garden, you are surrounded and astounded by the skyscrapers all around you.
First, look at the building with a diamond-shaped roof. Its shorter than the other skyscrapers around but extremely distinctive. This diamond building is the Crain Communication Building, and its been delighting architecture enthusiasts since its completion in 1984.
The Petronas Towers in Kuala Lumpur, Malaysia surpassed it in 1998. It used to be the headquarters of the world-renowned Sears Roebuck Company.
The Prudential Tower: This was the first major skyscraper constructed in post World War II Chicago. Completed in 1955, the tower gave Chicago residents and visitors a chance to see the city from an observation deck known as The Top of the Rock.
Duration: 15 minutes
Stop At: Nichols Bridgeway, Chicago, IL 60601, USA
The Nichols Bridgeway is a pedestrian bridge located in Chicago, Illinois. The bridge begins at the Great Lawn of Millennium Park, crosses over Monroe Street and connects to the third floor of the West Pavilion of the Modern Wing, the Art Institute of Chicago's newest wing.
Duration: 5 minutes
Stop At: The Boeing Store, 410 W Washington St 100 North Riverside Building, Chicago, IL 60606-1550
The space in front of you always features something different. The contemporary art sculptures displayed here are often large-scale and highly symbolic. Spend a little time here to try to understand the artists vision.
Duration: 10 minutes
Stop At: Crown Fountain, 201 E Randolph St Millennium Park, Chicago, IL 60601-6530
Crown Fountain is an interactive work of public art and video sculpture featured in Chicago's Millennium Park, which is located in the Loop community area. Designed by Catalan artist Jaume Plensa and executed by Krueck and Sexton Architects, it opened in July 2004
Duration: 5 minutes
Stop At: Cloud Gate, 201 E. Randolph St. Millenium Park, Chicago, IL 60601-6530
Cloud Gate is a public sculpture by Indian-born British artist Sir Anish Kapoor, that is the centerpiece of AT&T Plaza at Millennium Park in the Loop community area of Chicago, Illinois. The sculpture and AT&T Plaza are located on top of Park Grill, between the Chase Promenade and McCormick Tribune Plaza & Ice Rink
Duration: 10 minutes