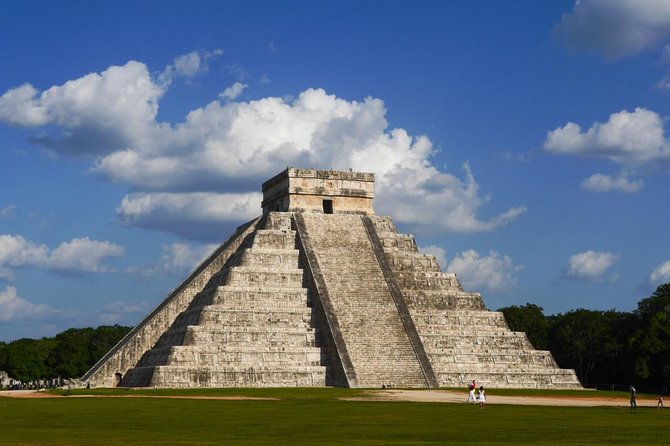 Enjoy a spectacular and complete day trip in which you'll visit Chichen Itza and enjoy the site for more than 3 hours. You also have a chance to swim at Cenote Ik Kil and enjoy a lunch buffet. We also been visiting the Colonial City of Valladolid including the church, a convent & the central plaza. This is a guided small group tour with no more than 15 people.

Your tour begins with hotel pickup in the Riviera maya aboard an air-conditioned van and head to Chichen Itza first. Enjoy a continental breakfast on board and once at the site you'll enjoy a guided tour with your group. Chichen Itza in Maya means "Mouth of the well of water witches" and it is one of the major archaeological sites of the Yucatan Peninsula.

See the main building known as the Kukulcan Pyramid which represents the Mayan civil calendar. Other prominent buildings are El Caracol or also known as the Observatory, the Group of the Thousand Columns, Church, Temple of Venus, Temple of the Jaguar and the Ball Court, the largest built throughout Meso-America. Know this place in the approximate two-hour guided tour and then have some free time to explore on your own.

Then, head to Cenote Ik Kil, located a few kilometers from Chichen Itza. Here, you can take a refreshing swim as the cenote has a depth of 60 meters. Afterwards, enjoy a buffet lunch and then drive to the magic city of Valladolid.

At Valladolid, you will be visiting the downtown landmarks like the main church, a convent & city hall

After a wonderful day tour seeing the heart of Mayan Culture, you'll be dropped-off back at your hotel.