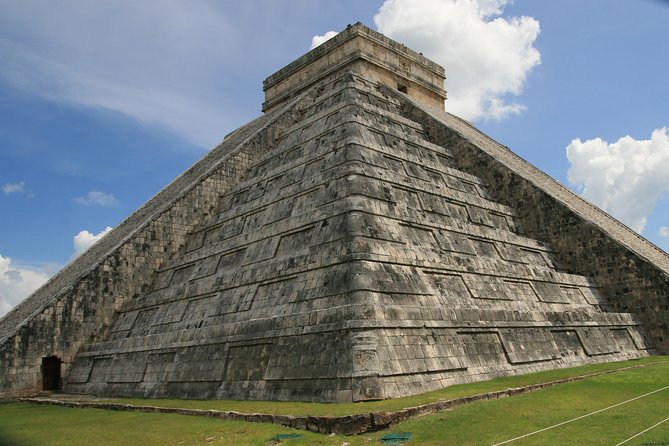 Come and visit the most important city of the Mayan culture in the Yucatan peninsula, after enjoying the 7th wonder of the World, you will be visiting the beautiful colonial city of Valladolid and the Mayapan Distillery where you will be learning about the traditional way of Agave production.

You will be picked up from your Tulum or Playa del carmen hotel between 6:30 and 7am and taken toChichen Itz ruinswhere you will have a 2-hour guided tour. Afterwards you will visit Valladoid City where you can do some sightseeing and enjoy a traditional Yucatan lunch.
You will then head to the Mayapan distillery for a 1-hour guided tour. The tour will end at around 6pm once you are dropped off at your hotel.

It means At the mouth of the well of Itza , is the 2nd most visited archaeological site of Mexico today. The Kukulkan Pyramid in Chichen-Itza which known as El Castillo (the castle), is one of the new seven wonders of the world elected in 07.07.2007. It is exactly 24 meters high considering the upper platform. Apart from the Kukulkan Pyramid, in Chichen Itza there many other archaeological sites to visit, all carrying traces from Mayan Culture in many ways. Chichen-Itza is located in the Yucatan Peninsula, between Merida and Valladolid and is only 120 km from Merida.

Also known as the Sultaness of the East, Yucatns third-largest city is known for its quiet streets and sun-splashed, pastel walls. Valladolid has seen its fair share of turmoil and revolt over the years. The city was first founded in 1543 near the Chouac-Ha lagoon some 50km from the coast, but it was too hot and there were way too many mosquitoes. So they upped and moved the city to the Maya ceremonial centre of Zac, where they faced heavy resistance from the local Maya. But the Spanish conquerors took the town and laid out a new city following the classic colonial plan.

The traditional way of using the techniques that were used more than 400 years ago. This artisanal process gives the agave distill its unique and exquisite bouquet. The tour at the distillery includes a walk through the Agave fields, a visit to the distillery where the visitor can see step by step the process to obtain the end product and finally tasting of the products.

Hotel pickup and drop-offs (from Playa del Carmen to Tulum)