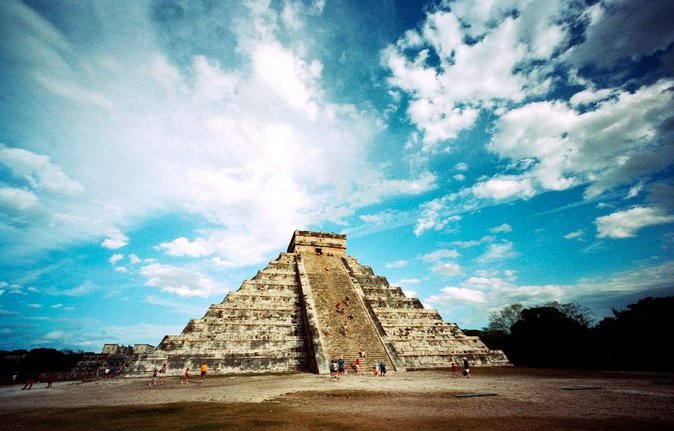 The Spectacular UNESCO World Heritage Site, Chichen Itza, holds both mystery and magic. Explore the most important archaeological zone and ancient capital of the Mayan Empire on a full day guided tour from Cancun. Admire the majestic observatory, the Pyramid of Kukulcan, the Temple of Warriors, the ball court and the castle. Sample typical Mayan cuisine at a buffet lunch and swim in a Cenote. Your Chichen itza day trip includes hotel pickup and drop-off and a professional guide.

During your stay in Cancun, you simply must take the opportunity to visit Chichen itza, the most important archaeological zone in Yucatan. After hotel pickup in Cancun, explore the ancient capital of the Mayan Empire and learn why it has been designated one of the modern wonders of the world. Its extraordinary architectural beauty and geographical location are sure to leave you in awe.
Your first stop is a 50-minute visit to either the Ik kil Cenote or Hubiku Cenote. The Cenote visited will depend on which area is less populated on the day of your tour. You'll have free time to explore this natural wonder, so be sure to bring along your towel and swimsuit! By 10:50, you'll head to the world-famous archaeological site of Chichen itza.
At approximately 12:00 pm you will be inside the archaeological site. You'll then be divided into English and Spanish speaking groups for a guided tour. You'll be taken on a 1.5-hour tour with a certified guide who will introduce you to the secrets of the Mayans. Your guide will explain the historical significance of all the most important sites before leaving you to enjoy the ruins on your own until 3:00 pm. See the Pyramid of Kukulkan, el Castillo (the Castle), the Temple of Warriors, and much more.

After exploring the site, you'll head to the local restaurant and enjoy a buffet of fresh salads, soups, rice, meat, chicken, fish, vegetables, and other regional dishes (drinks at own expense).

After lunch, you'll be transported back to your Cancun hotel.