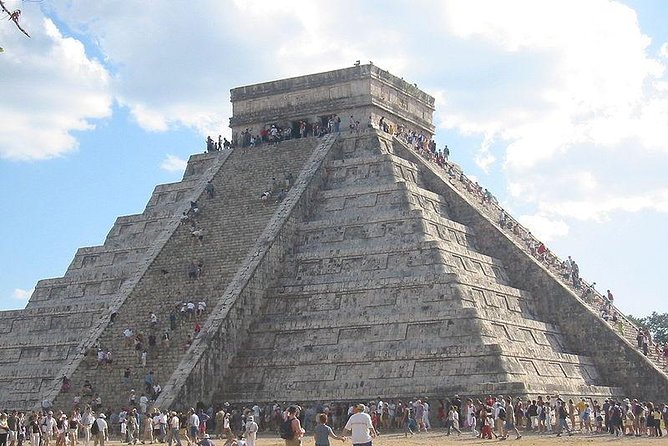 See one of Mexico's most-visited archaeological sites during this full-day trip from Cancun. Travel comfortably by luxury coachthrough the rustic countryside of the Yucatn Peninsula, reaching the UNESCO-listed Mayan ruins of Chichen Itza. Take a guided tour of the monument, exploring prominent features like El Castillo and the Temple of Warriors. Head to a restaurantfor a traditional Mexican buffet lunch before swimming in a 'Cenote' (an underground cave). Round-trip transportation from your hotel is included.

Getpicked up from your Cancun hotel at 7am, then board aluxury coach for a 2.5-hour drive through the scenic countryside of the Yucatan peninsula.

Upon arrival at the ancient Mayan ruins of Chichen itza, participate ina guided tour. Explore the UNESCO-listed World Heritage Site's prominent features like Kukulcan Pyramid, and learn why Chichen itza was a center of commercial and religious power;and is considered to be one of the most important vestiges of pre-Hispanic culture.

Your next stop isa Cenote;an underground, freshwater swimming hole. Plunge into the refreshingwaters of the natural well inside a cave covered with lush vegetation.Then, sit down at a restaurant to enjoya buffet lunch of traditional Mexican farebefore heading back to Cancun.The tour concludes around 7pm, when you are dropped back off at your hotel.

Visit to the Sacred Cenote Temozon. Free time to enjoy your swim in the cenote (45 minutes)