Chinese Religious Exploration Of Temples And Mosque In Beijing

Chinese Religious Exploration Of Temples And Mosque In Beijing 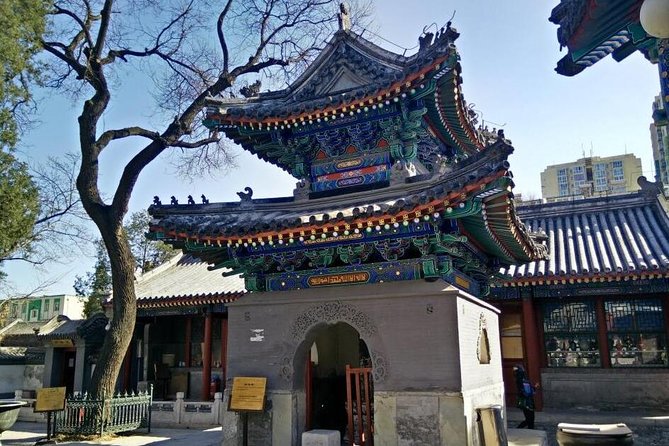 Follow a knowledgeable local insider to explore the Chinese religious heritages in Beijing, learn Chinese religious history and culture. On this full-day guided trip, you will visit the Taoism temples (Temple of heaven, White cloud temple), Buddhist temples (Lama temple, Fayuan temple), the Confucian Temple and the Ox Street Mosque. If are interested in Chinese Religions, this would be the perfect choice for you.

Meet local tour guide at your downtown hotel lobby at 8:30 am, aboard the private vehicle and enjoy comfortable transfer to start the religious tour. Get a basic religious knowledge from your guide on the way.

This morning, you will visit the Yonghe Lamasery, Temple of Confucius and Temple of heaven. Yonghe Lamasery was the former residence of Emperor Yongzheng when he was just a prince and later became the national centre of Lama Administration. The Temple of Confucius at Beijing is the second largest Confucian Temple in China, after the one in Confucius' hometown of Qufu. And The temple of heaven, where the Emperors paid homage to the glory of heaven, is the largest group of structures in the country dedicated to rituals.

Later you have a delicious lunch served in a nice local restaurant, then continue the religious trip to White cloud temple, Fayuan temple and Ox Street Mosque. The White cloud temple, also named Baiyun Taoist Temple, is one of the three "ancestral courts" of the Quanzhen Sect of Taoism. Fayuan temple is the oldest Buddhist temple in Beijing with a long history of more than 1,300 years. And Ox Street Mosque (Niujie mosque) is Beijings most historical and majestic mosque firstly built in 996.

After tripping to Taoism temples, Buddhist temples, Confucian Temple and Mosque in Beijing, you will surely gain rich knowledge of Chinese Religions from your informative guide. Then return to your hotel to conclude the trip.