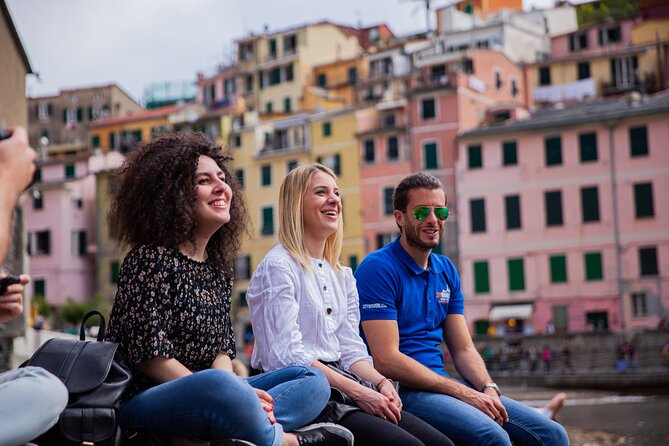 Get an early start on an amazing day journeying out of Florence, and its man-made masterpieces, because you are off to the Italian seaside. Admire natures artistry in Liguria, a spectacular region and home of Cinque Terre the much acclaimed string of seaside villages along the Italian Riviera. Steep terraces adorned with colorful homes and vineyards, rugged fishermen reeling in their daily catches, and the regions most famous flavor pesto. All experiences you can enjoy on this tour.

Sit back and relax for this 2.25 hour ride via comfortable, air-conditioned coach. Your guide will entertain you with tales of the area as you cross two regions: Tuscany and Liguria. Both are rich with history, cultures and traditions that deserve to be told. Upon arrival, youll be escorted to a quaint and comfortable public boat.

Tailoring your adventure to the most beautiful sites, weve made sure to include Poets Gulf, of course, via a beautiful cruise. This colorful, evocative and unique coastline is dominated by green hills and clear waters.

The cruise through Poets Gulf will bring you to the town of Portovenere, one of the most stunning places on the West Coast of Italy. Youll notice fishermens boats docked daintily by the beach, colorful homes peppering the scenery, an old castle looming on the horizon, churches standing omnipresent. Enjoy free time to explore this beautiful village on your own.

After a pleasant 1.25 hour cruise down the Ligurian coastline, well stop at Monterosso, the largest town among the Cinque Terre. Dine on a local dish as you please, stroll, shop, sit, swim (dont forget to pack your swimsuit) or even hike withan optional 45-minute light hike. Let your tour leader guide you through the terraced vineyards, the ancient olive groves and the spectacular panoramic views. After the hike, you will still be able to enjoy free time and wander around the charming town of Monterosso. So, the choice is entirely yours!

Then it is all aboard! as you are taken by train to the charming town of Vernazza, characterized by its narrow streets and small square looking out over the sea. It is so picturesque it will seem like youve stepped into a Renaissance painting. But it is entirely authentic, we assure you.

The final destination is Manarola. here youll be dazzled with views of the tiny harbour, full of colourful boats and vibrant natural formations. Once again, take your time to amble around the area on your own and discover everything fate has in store for just you.

Be sure to savor your final sampling of the Liguria regions famous flavors, including its highly prized pesto, because soon youll be back on board the train for a quick ride to your private air-conditioned coach to Florence.

Round-trip transport from Florence in a comfortable air-conditioned coach

We will do our best to make sure your trip includes all the sites as per description, however please note that itinerary might be adjusted according to weather and transport conditions

In public transportation is mandatory to wear a mask covering nose and mouth.

Government-imposed COVID restrictions for entering countries and venues (e.g. booster shot, negative COVID test, vaccine certificate with a QR code) may change with little notice. It is the responsibility of all visitors to ensure they check the official travel advice on the government websites.