City Half Day Tour Of Miami By Bus With Sightseeing Cruise 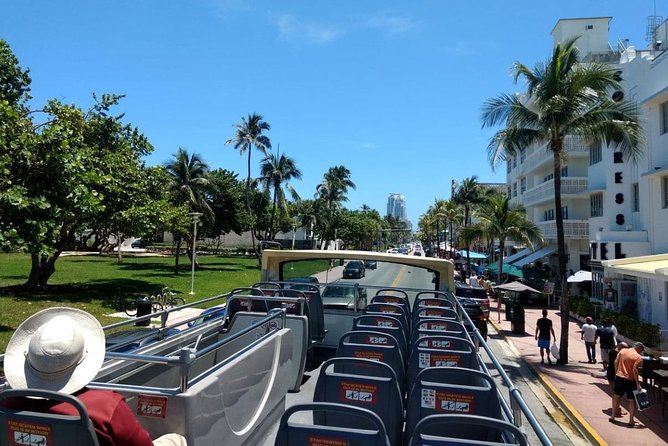 Explore Miamion this half day land & sea adventure tour departing every hour by hopping on an open top Miami Double Decker bus across the city and then exploring Millionaire's Row by boat. This experience covers all of Miami beach, Downtown, the Financial District, Key biscayne, Coconut grove, and Little havana along with Miami's hot-spots and historical landmarks. At the end of the tour route, you will be brought to Bayside marketplace to enjoy one hour of free time for lunch and shopping before jumping aboard the Miami boat tour. The 90 minute Miami boat tour will cover all of Millionaire's Row, Star island, Hibiscus Island, Palm Island, Venetian Island, Fischer Island and more. See all the homes of the rich and famous with a hand full of celebrity homes too!

The Miami bus and boat tour combo ticket departs every hour and starts you off with an amazing city experience, where you explore all of Miami's historical landmarks.

The Miami bus and boat tour combo ticket departs every hour and starts you off with an amazing city experience, where you explore all of Miami's historical landmarks.

This 2 hour bus tour will end at Bayside marketplace where there are many restaurants, art galleries, designer clothing and boutique shopping available. Once you've arrived at Bayside you will have one free hour for lunch and shopping.

After your free time, your tour guide will walk you over to the boat for departure. This 90 minute narrated boat tour will explore all of the islands and homes of the rich and famous. Light snacks and drinks are available for purchase on-board.

Free time for lunch and/or shopping

This tour/activity will have a maximum of 71 travelers