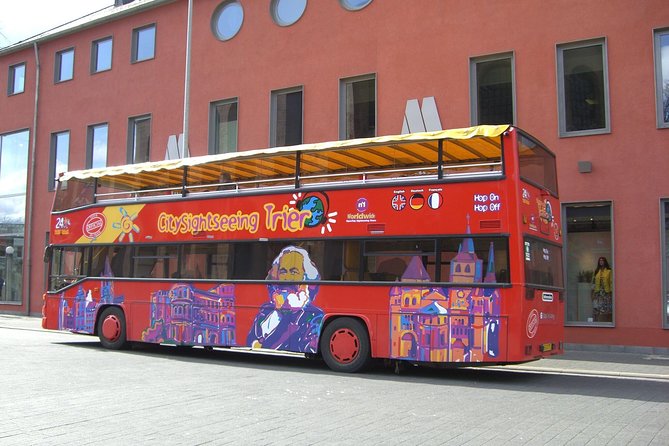 Discover Trier, one of Germanys oldest cities, at your leisure on our City Sightseeing hop-on hop-off tour! As you explore the city by open-top double-decker bus, put together your own day of sightseeing and visit the places that interest you most! Hear about standout sights from the audio commentary, and pay visits to Konstantin Basilika, Karl Marx Haus and Trier Roman Amphitheater among other attractions. The tour ticket is valid for 24 hours from first use!

With its centuries-old monuments and Roman ruins, Trier has history steeped in its streets. See its sights from the vantage point of a hop-on hop-off City Sightseeing bus, and travel around the city at your own pace! Your tour includes 7 stops around the town, and allows you to hop on and off wherever and whenever you like!

From the very beginning of the tour at the Porta nigra, passengers will be greeted with one of the city's most historic landmarks. The Porta nigra is the largest Roman city gate in the North of the Alps and it's now considered the most symbolic monument in Trier.

Perhaps pay a visit to Karl Marx Haus to learn about the revolutionary who was born in the city. Or, jump off at Triers 20,000-capacity Roman Amphitheater, which is said to have been one of the largest in the Roman Empire.

Throughout the duration of the tour, passengers will enjoy panoramic views of Trier's beautiful streets, particularly as the bus passes through Zurlaubener Ufer, where you can hop-off for a bite to eat and admire the scenic surroundings.

Between stops, sit back and enjoy the ride. A full loop on board the bus lasts approximately for 50 minutes, and includes sights of Konstantin Basilika, Barbarathermen and much more. Listen to audio commentary about each sight as you go (accessible in several languages), and enjoy use of your tour ticket for a full 24 hours from time of first use!

The tour stops along the route include:

Passengers can hop-on and off at any of the 7 tour stops along the route.

Season: This tour is seasonal and only operates in April - October.